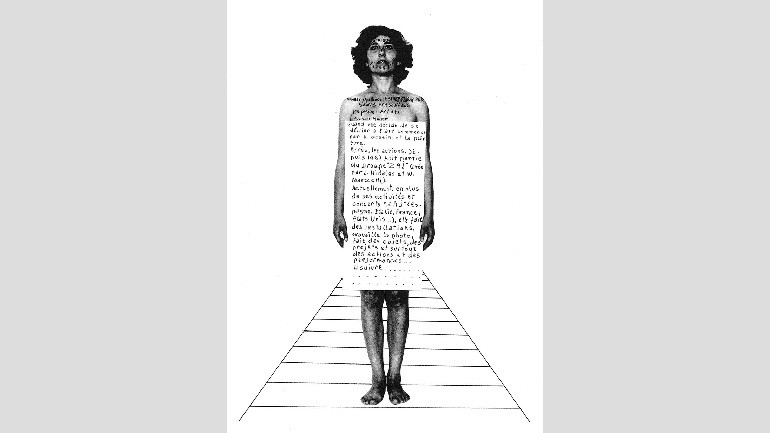 Esther Ferrer, Biografía para una exposición, 1982.
Collage. Photography and ink on paper. 32,5 x 24 cm.
Courtesy of the artist
ESTHER FERRER
All Variations Are Valid, Including this One
26 October 2017 – 25 February 2018

Esther Ferrer (San Sebastián, 1937), a pioneer and one of the foremost representatives of performance art in Spain, began participating in the activities of the Zaj group — with Walter Marchetti, Ramon Barce and Juan Hidalgo — in 1967. From that point on, she brought action art to the fore in her artistic practice, although from 1970 she did return to visual art by way of reworked photographs, installations, pictures based on the series of prime numbers or Pi, objects, and so on. These pieces most notably include the series Autorretratos (Self-Portraits), in progress since 1981, Números primos (Prime Numbers), carried out with different spatial-temporary formats, and Juguetes educativos (Educational Toys), from the 1980s, her work adhering to the Minimalist and Conceptual Art initiated in the 1960s, with Stéphane Mallarmé, Georges Perec, John Cage and Fluxus the points of reference, along with aspects of feminism from the time.

Ferrer gives repetition and chance the capacity to enhance her work, generating manifold variations which lead on to otherness and unpredictability. The exhibition Todas las variaciones son válidas, incluida esta (All Variations Are Valid, Including this One), presented by the Museo Reina Sofía, addresses these issues and reflects upon other key aspects in her artistic practice, for instance the visibility of the creative process in time and space and the mobilisation and transformation of the body. As it enhances and experiments with the idea of continuity and the performance side of Ferrer’s work, the show activates certain pieces and a non-chronological discourse which facilitates unexpected connections and changing approaches to her oeuvre. The selection of works includes performances and installations, and a series of visual projects — preparatory works and finished series, and documents from her main actions (photographs and videos).

Running alongside Ferrer’s artistic practice is her significant theoretical work, developed in both her journalistic collaborations for wide-ranging publications and in courses and lectures given at European and American universities. The exhibition’s accompanying catalogue features a selection of these texts.

Esther Ferrer has, throughout her extensive career, participated in a number of Action Art festivals and has exhibited her work in different museums, in addition to gaining recognition in different contexts: in 1999 she was one of Spain’s representatives at the Venice Biennale; in 2008 she was awarded the Premio Nacional de Artes Plásticas; in 2012 she won the Premio Gure Artea del Gobierno Vasco, and in 2014 the Premio MAV (Women in the Visual Arts), the Premio Marie Claire de l’Art Contemporain and Premio Velázquez de Artes Plásticas.
www.museoreinasofia.es