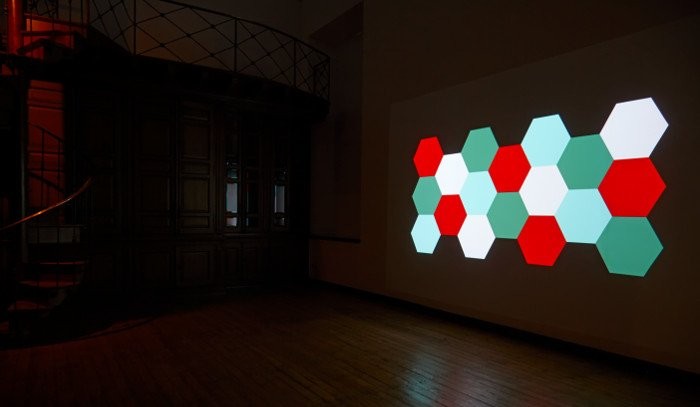 In the former, visitors are met with engraved signs - aesthetically related to op art and kinetic art - that evoke the areas of transition found in traditional film exhibition spaces, areas such as box offices and vestibules. Contact is thus made with the intermediate symbolic geography suggested by Acevedo, the area between State and spectacle and between citizen and spectator. Dichotomies formed by the political and the spectacular, focused on the architectures of power, civil servants and commercial establishments.

After selecting a seat, all of which have been used at some time prior to the founding of the museum, as office chairs that have been taken out of storage for this exhibition, spectators are shown Ciudadano Paranormal. The video contains a number of people talking about the presence of paranormal phenomena in official buildings, exploring ghostly interference in the supposed disciplined normality that usually characterises institutions. The artist includes what happens in front of the camera during moments not intended for broadcast, such as advertising breaks. This footage shows how television language is built and highlights its need for architectures that lose their functional meaning when they are not accompanied by the narrative and editing techniques that normalize such structures in the eye of the television viewer.

In the Protocol Room, viewers see Cliente Secreto, an audiovisual project that reveals the tools of authority embedded in labour policy. A series of uniformed supermarket employees conceal, under the cloak of nationalistic enthusiasm, the servility of work carried out like a beehive society or army, full of discipline-forming routines. These creations have their genesis in a context like Peru's current situation, in which the country is experiencing economic growth but such growth is not accompanied by a strengthening of institutions. This brings about the sensation of a progressive fading of the State, that spectral-State that confronts the authoritarian market about which Acevedo allegorically speaks to us.
www.museoreinasofia.es