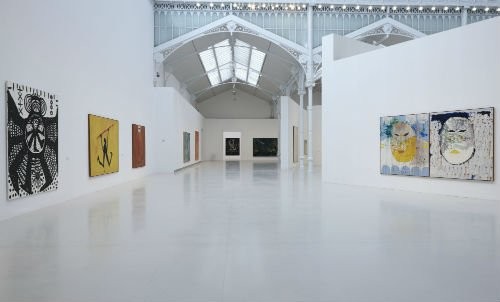 The artists of Idea: Painting-Force take a new approach to concepts such as Academia and Tradition, developing them not as weighty and repetitive dogma but rather as a source of energy from which to work contemporarily.

Their gaze tends to focus on some of the most significant representatives of Europe’s historical avant-garde movements (such as Cézanne, Matisse, Picasso...) and also on subsequent rereadings by North American artists (De Kooning, Motherwell, Johns...). However, the artists do not distance themselves from other periods and other cultural geographies, and in some of their works an admiration for Poussin, Velázquez, India and North Africa can be glimpsed. Their gazes arise not from mimesis or from the search for originality, but from the aspiration to make pictorial practice an intellectual process and a process by which to construct the subject.

The works of Alfonso Albacete, Miguel Ángel Campano, Ferran Garcia Sevilla, Juan Navarro Baldeweg and Manolo Quejido, dating from 1978 to 1984, comprise the proposal put forward in Idea: Painting-Force. This selection of creators is not to be understood in the sense of a group, in the orthodox sense, but rather through the (post)conceptual filiations of several of them and their transfers and convergences towards a metareflexive pictorial practice that becomes an essay of itself. They carried out this activity at the height of the crisis affecting the modern movement and the idea of the avant-garde. Plus, they were working in Spain, in a setting that, on the hinge between the 70s and the 80s, was experiencing some newly-arrived democratic liberties and whose artistic scene had derived from the dominant acritical formalism to the emergence of the market and the aesthetics of success.

Interior V. Light and Metals, an installation created in 1976 by Juan Navarro Baldeweg, opens the exhibition Idea: Painting Force at Palacio Velázquez. In this work, the artist dialogues with conceptual languages he investigated previously. But the work also announces what the artist himself calls “a hunger for painting,” a hunger that soon gave way to the tendency to slip into pictorial practices, a tendency that characterises most of the exhibition.
www.museoreinasofia.es