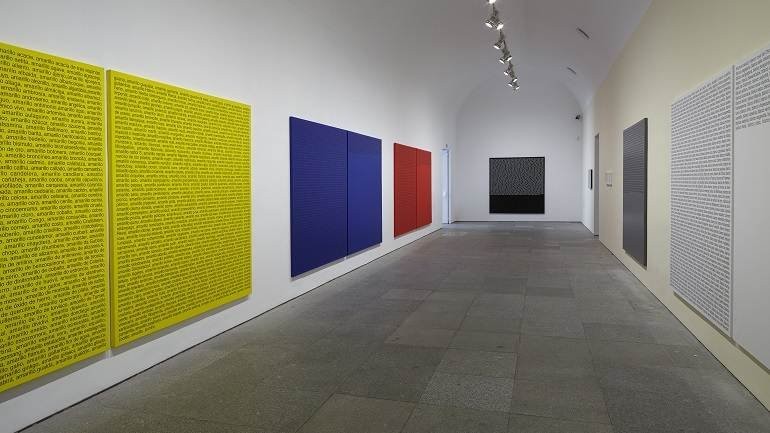 Ignasi Aballí (Barcelona 1958) offers a conceptual reflection on the representation and perception of mediums such as painting, the object, photography, fiction, film and video. His work, which started in the 1980s, invents and reorganises texts, images, materials and processes, exploring presence and absence, the material and immaterial, the visible and the invisible, transparency and opaqueness, appropriation and creation to relate the overabundance of images in modern-day society to the lack of meaning we can assign to them.

The show mainly focuses on his output over the last ten years, although it does feature lesser-known pieces from periods of his work that came before. It offers a journey through the artist’s aesthetic ideas, which question the conventional systems that represent the artwork through photographs, videos and installations, sculptures, paintings and collages, and with an eclectic display of unconventional materials such as leaves, dust, rust, metals, newspaper cuttings and scraps of bank notes, which all become fragments of the critical poetics of conditions representing life and art in the contemporary world.

Among the themes addressed by Aballí’s work, we can highlight the analysis of language and, more specifically, the relationship between text and image, between words and things, or between objects and the terms that define them. In the exhibition these concepts are illustrated by works that include the Cartas de colores [Teoría] (2007) series, and the Vitrinas CMYK (2010) pieces, four display cases – one for each ink colour used in the printing process – whereby the conventional support of the artwork becomes the actual work, whose function is not to show but rather “demonstrate” the paradox of what remains unseen.

Another chief concern in Aballí’s work is the dichotomy between presence and absence as he ponders the notions of disappearance, transparency, invisibility and illegibility. This results in a series of works where, aiming to insinuate more than affirm, only the presence of objects is evoked; a unique game with the viewer that involves the search for reality and fiction, the visible and invisible, the transparent and the opaque, for what is shown and what is concealed. A clear example of this practice can be seen in the series Tomar medidas (2010), where measuring instruments take centre stage, Entre líneas (2011), an installation based on the empty and illegible space of texts, and the one devoted to double readings Dobles lecturas (2010), alluding to writers such as Bernhard and Joyce.

Lastly, it is worth noting the artist’s need to classify and order, perhaps the most intrinsic characteristic in his work. We come across an artist who collects, draws up an inventory and meticulously assembles pieces of information from newspapers and compiles captured images ad infinitum. We are referring to series like Terminologías básicas del color, Listados, Mapamundi and Inventarios, all produced between 1998 and 2015, where, at first glance, the persistent repetition of identical motifs leads to the appearance of difference.
www.museoreinasofia.es