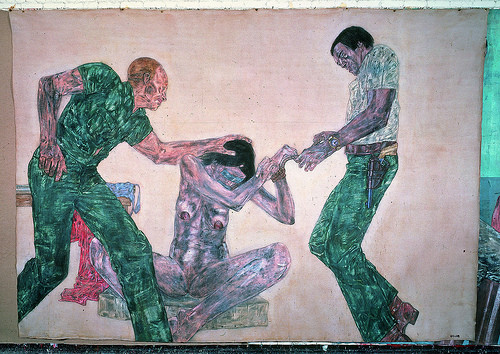 The art of Leon Golub (Chicago, 1922 - New York, 2004) challenges the dominant model of the development of art from the 1950s onward. Oblivious to the media experimentation taking place in most artistic production during these decades, Golub's work is based on a pictorial renovation in which genres believed to be exhausted, such as historical painting or portraits, once again show unexpected expressive and critical capacity. His evolution as an artist is also somewhat paradoxical, making the debate between abstraction and figuration meaningless: during the time he spent in Paris with his wife, the artist Nancy Spero, in the late fifties and early sixties, he adhered to the ideas of abstract informalism of Michel Tapies or Jean Dubuffet, later moving towards spaces in which his art could explore the most traumatic realism.

The international political scene at the time, characterised by the brutality of facts and events such as the Vietnam War, the apartheid regime in South Africa and the consequences of imperialism, constantly reverberates in Golub's painting, like an ever-present murmur that cannot be silenced. Not only is the isolation from society and the political climate, typical of the modern pictorial tradition, absent in the case of Golub, in his work he makes constant allusions to specific individuals and socio-political events.

On one occasion Golub pointed out that his work was an invitation to a place where nobody wanted to go, taking for granted that his paintings put the viewer in a situation of becoming a witness, or even an accomplice, whose gaze is returned by the figures inflicting pain. The link between the executioner and the viewer turns all acts of violence into a questioning of the incapacity to act that is assumed in contemporary visual rhetoric.

This exhibition brings together the artist's most important works, proposing a sensory logic that is found throughout his artistic production. Structured around the paradigmatic Vietnam II (1973), the exposition also shows other stages not as well known, such as his early informalist phase, the sphinxes he created in the 1950s, the napalm paintings of the 1960s, the portraits of dictators and politicians – including Franco – or their mercenaries and interrogations, all of which help to convey the complexity of Leon Golub's work.
www.museoreinasofia.es