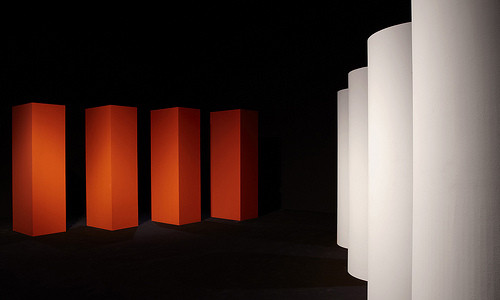 The work of Lygia Pape (1927-2004) arose in a setting very much characterised by a spirit of renewal. In Brazil, one of the most innovative art contexts in the second half of the 20th century, the tensions inherent in the arrival of modernism coexisted with the opposite extreme: dictatorships, false economic miracles and cultural movements based on local considerations, yet doomed to live in exile. Linked to the Concretism movement of Grupo Frente, she soon became associated with the Neo-Concrete current, along with artists such as Lygia Clark, Hélio Oiticica, and poets, such as Ferreira Gullar. Although Pape is often compared to these figures, until now her art has not received the critical attention that has been given to her colleagues.

Lygia Pape's activity during her career responds to this need to broaden the field of the sensitive, a prevalent trend in 1950s Brazil, but in her case it displays a high degree of coherence in a wide range of media. At the end of this decade, which inherited the ultra-rationalism of Brazilian Concretism, she did a series of woodcuts -Tecelares-, which she understood not as a foreshadowing of reproducibility but rather as a process of material refinement that gives rise to light: the single copy was the reflection of the conceptual density with which the process was understood. In the 1970s she participated in several of Cinema Novo's film productions, where she designed the credit sequence and other visual representations. She combined this work with activities at the Sao Paulo Museo de Arte Moderna, truly an exemplary case of experimental production involving an active audience. Then in the 1980s she was influential as a professor at Santa Úrsula University, where she taught semiotics at the school of architecture and gave students an alternative pedagogy with which they learned to value vernacular constructions far from academic dogma. Subsequently she learned to combine her visual production, geometric in nature, with a certain homing instinct for tribalism, recalling the hybrid qualities of the anthropophagic movement of the first half of the century.

Also deserving of special mention are her books, where she imagines a world based on material praxis and experimentation that give less priority to the author and instead favour a reader capable of generating a work other than the written language. Her films for geometric objects in dance (Ballet neoconcreto, 1958) or her unclassifiable performance piece Divisor(1968), a textile work meant to be performed collectively (and reactivated in this exhibition), convey some of the basic ideas of a space that attracts the audience and its emotions as if it were a magnetised object.
www.museoreinasofia.es