More than a catalogue 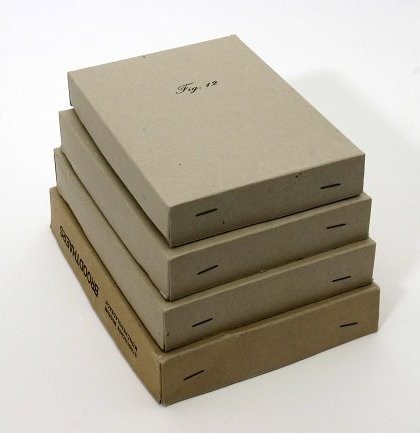 By virtue of the renewed conceptions of art which developed in the 1960s and 1970s, museums were forced to renovate their way of presenting art works, and also their idea of what art publications could be. In this context, Johannes Cladders, director of the Städtisches Museum Abteiberg Mönchengladbach (Germany) at the time, developed an exceptional publishing project: a series of “Kassettenkataloge”, or catalogue-boxes, which managed to attract the attention of the international art world.

This exhibition, curated by Guy Schraenen, is devoted to the outstanding originality of this series of grey cardboard boxes, with which Johannes Cladders provided an unconventional and pertinent overview of the international vanguard art of the period, including seminal movements such as Conceptual Art, Fluxus, Arte Povera, Pop Art, etc. Made between 1967 and 1978 in limited and numbered editions, these boxes are unique in their conception. Their design was entire responsibility of each of the invited artists, and results of their complicity with the museum. All of them have similar sizes (ca. 21 x 17 x 3 cm), but each one is different in content and form. Some of them include posters, booklets, documentation and texts, while others comprise multiples: for example, the plastic rose by Jasper Johns, a series of four boxes by Marcel Broodthaers, a ca. 15 meter long parcel string by Panamarenko, and a huge, black, crumpled silk paper with gold print by James Lee Byars, enclosed in a golden box. Further boxes include original pieces such as the felt piece cut by Joseph Beuys, and the hand-painted inside of the box by Gerhard Richter.

These few examples give an overview of the richness of this collection of 33 different pieces (the 34th box, by stanley brouwn, exists only as a concept), which nowadays are considered rarities, and occupy a prominent place in international collections, among them the Library and Documentation Center of the Museum Reina Sofía.