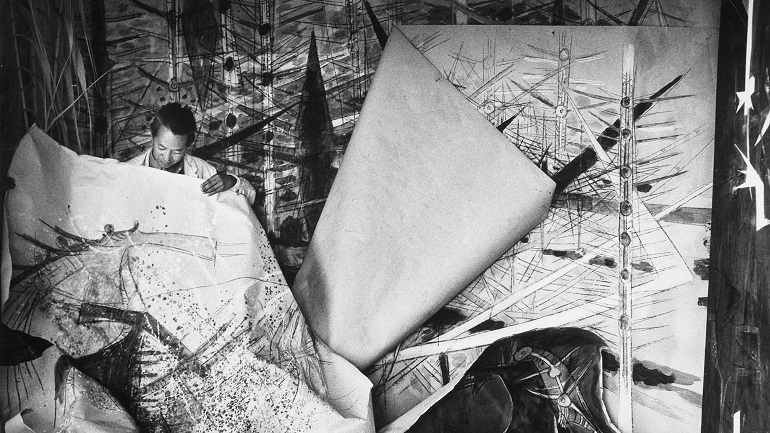 Wifredo Lam in front of one of his works from the Brousses series in his studio of Albissola, 1963
WIFREDO LAM
6 April - 15 August 2016

A pioneer of cross-cultural painting that infused Western modernism and African and Caribbean symbolism, Wifredo Lam (Sagua La Grande, 1902 – Paris, 1982) was in touch with every avant-garde movement at the time, whilst also addressing world problems. His deeply committed work, exploring the diversity of expression and mediums, from painting to drawing, prints and ceramics, took on the same struggle as his friend Aimé Césaire: “to paint the drama of his country, the cause and the spirit of the blacks.” From an early age, Lam became aware of the issue of race and its social and political implications in Cuba, Europe and later in the USA. He was associated with divergent national, social and culture spheres, but always maintained his distance and avoided falling into roles or the impact of identity imposed upon him, with good intentions, by friends and admirers. Lam invented his own unique and original artistic language to defend the dignity of life and freedom.

The exhibition revolves around the genesis of his work, the diverse stages and conditions of reception and the progressive integration of a body of work that was painstakingly put together in Spain, Paris, Marseille and Cuba. It traces the artist’s unique career by way of almost two hundred and fifty works – paintings, drawings, etchings, prints, ceramics - and is completed with over three hundred documents – letters, photographs, magazines and books. This broad range of material casts light upon his work and thought, zooming in on the years he spent in Spain (1923–1938), the remarkable prints from the 1960s and 1970s and his collaborations with eminent writers of his time, in addition to the major works he produced in his native Cuba (1940–1950); In short, it depicts a committed life inside a turbulent century.
www.museoreinasofia.es