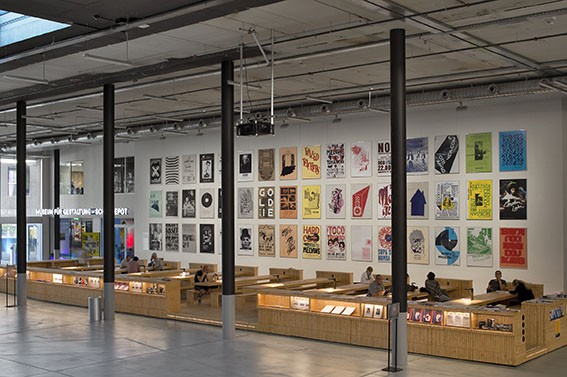 In the entrance hall of the Toni-Areal the Museum für Gestaltung uses the 140 m2 of the Nordwand for presentationen. Admission is free.

Graphic design and music form a legendary team: many designers themselves performed as musicians on the stage, while others found fulfillment as concert promoters. The rhythm and dynamics of very different musical styles are to be found in their posters that move with sovereign ease between art and graphics, in the process often reinterpreting the laws of the medium. Around the city the subversive potential of these music graphics offers an exciting counterpoint to mainstream concert posters and tells about a music culture of generally short-lived clubs and subculture locations. Reproductions of Zurich posters from the past 15 years by Eric Andersen, Carolina Cerbaro, Flag, A. C. Kupper or Lukas Zimmermann among others, illustrate the enthusiastic, playful and experimental approach that makes up the special charm.
www.museum-gestaltung.ch