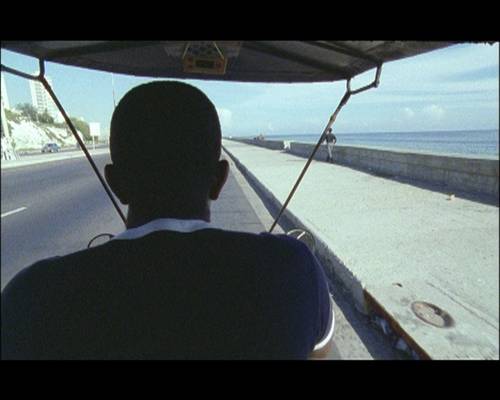 For three months starting on 15 July 2006, Museum Ludwig will be showing the video-installation “Independencia I” by Peruvian artist David Zink Yi.
The concept independence refers quite generally to the ability that some musicians seem to develop so that they can move their various limbs independently of one another while playing – such as the Bata drummers of Cuba, who must be able to use their left and right hands quite autonomously. The instrument was introduced to Cuba by Nigerian slaves, and initially constituted an important part in Yoruba rituals before becoming a general expression of the culture. It consists of a lengthy hollow wooden cylinder that tapers at the middle and has hides stretched over its two open ends. The opening to the left is somewhat smaller so as to produce the higher-pitched sounds that usually give the beat, while the melodic passages are played by the deeper sounds issuing from the right-hand side. It is traditionally believed in Cuban Yoruba that a divine entity sits inside this drum and tries to find the right rhythm for each of the religion’s 15 or so deities.

The installation Independencia I draws in various ways on the principles involved in playing the Bata drum. Two films are projected at either end of a long slender cube that has been based on the shape of the instrument. Shot very subjectively, both show a man from behind, in one instance while cycling along the Malecón, the promenade in Havana, and in the other instance as he rows through the sea alongside the same promenade. Simultaneously a voice from the off tells the story of the drum and of its socio-cultural importance. Standing in the cubic space between the two films, the visitors to the exhibition actually become the communicating vessel in this dialectical structure.

In his video installation Independencia I, David Zink Yi presents the use of the Bata drum as a metaphor of how the individual struggles for and also with his personal liberty. The identity of the individual, coloured by cultural and social factors and expressed by such actions as cooking, dancing or playing music, has become the central theme of this artist, who was born in 1973 in Lima and has lived since 1998 in Berlin.

The installation Independencia I has been realized as part of the Edition Bewegte Bilder – a cooperation between Museum Ludwig and Sammlung Rheingold. We would like to thank Sammlung Rheingold for its generous support.