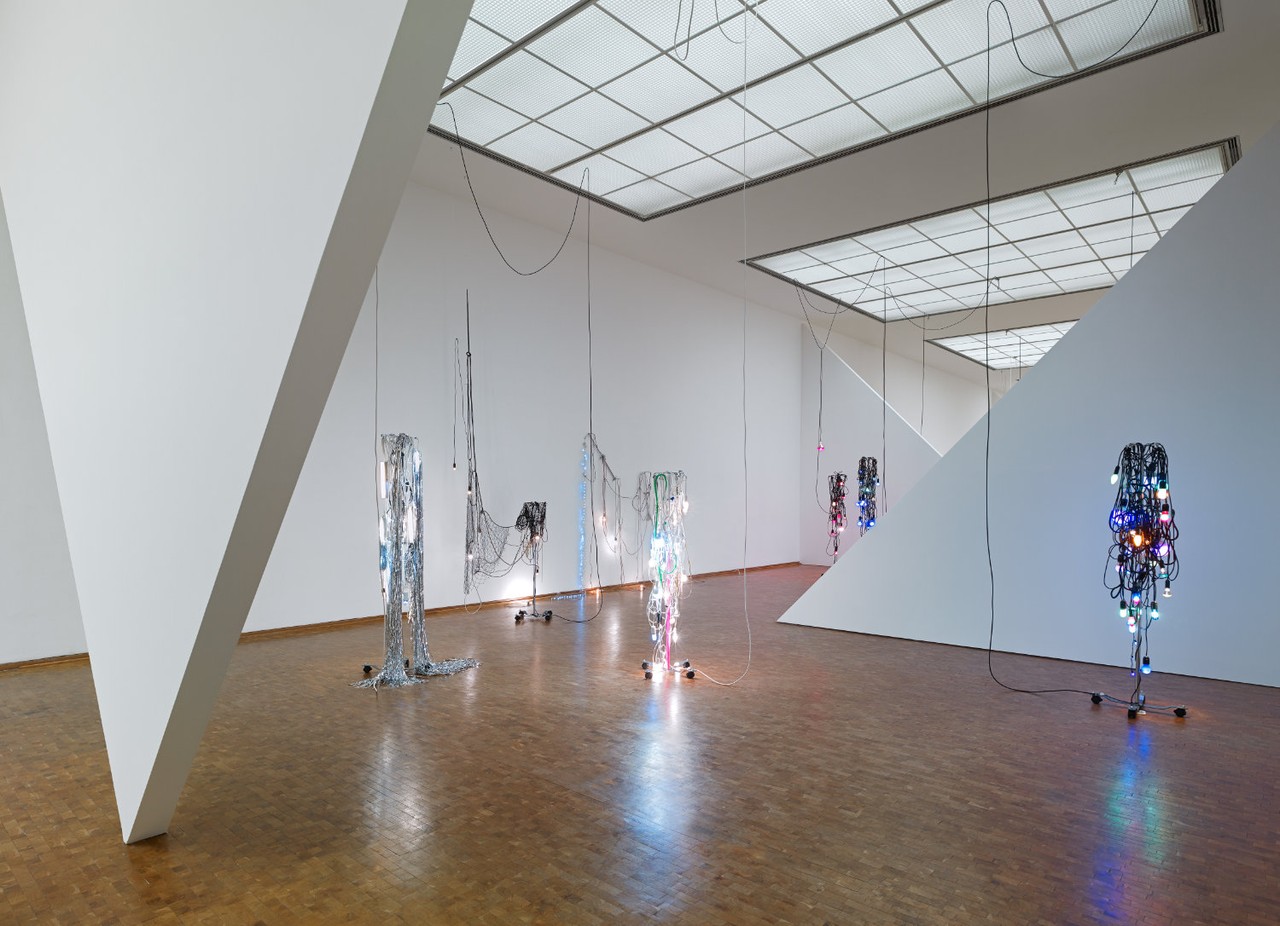 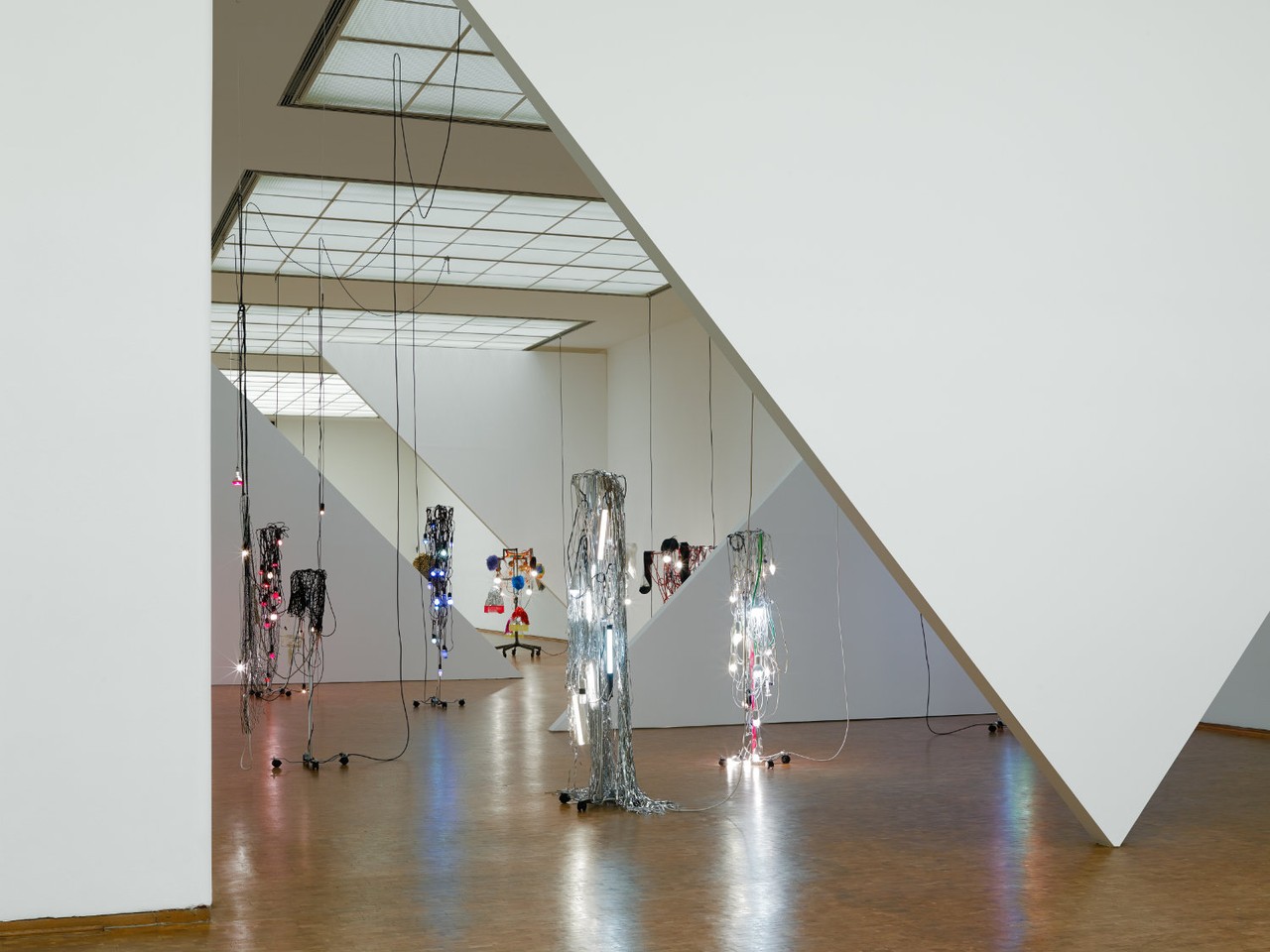 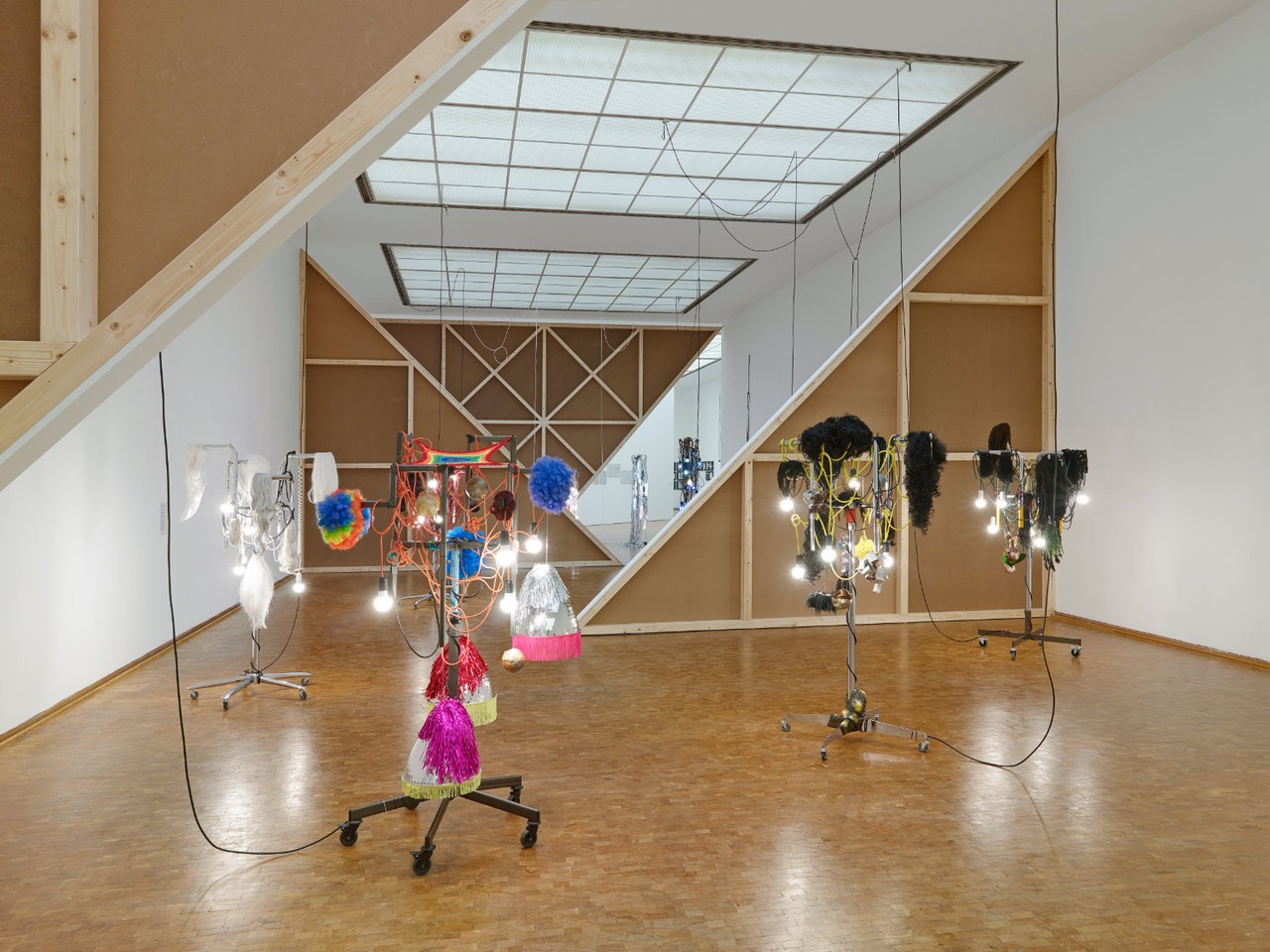 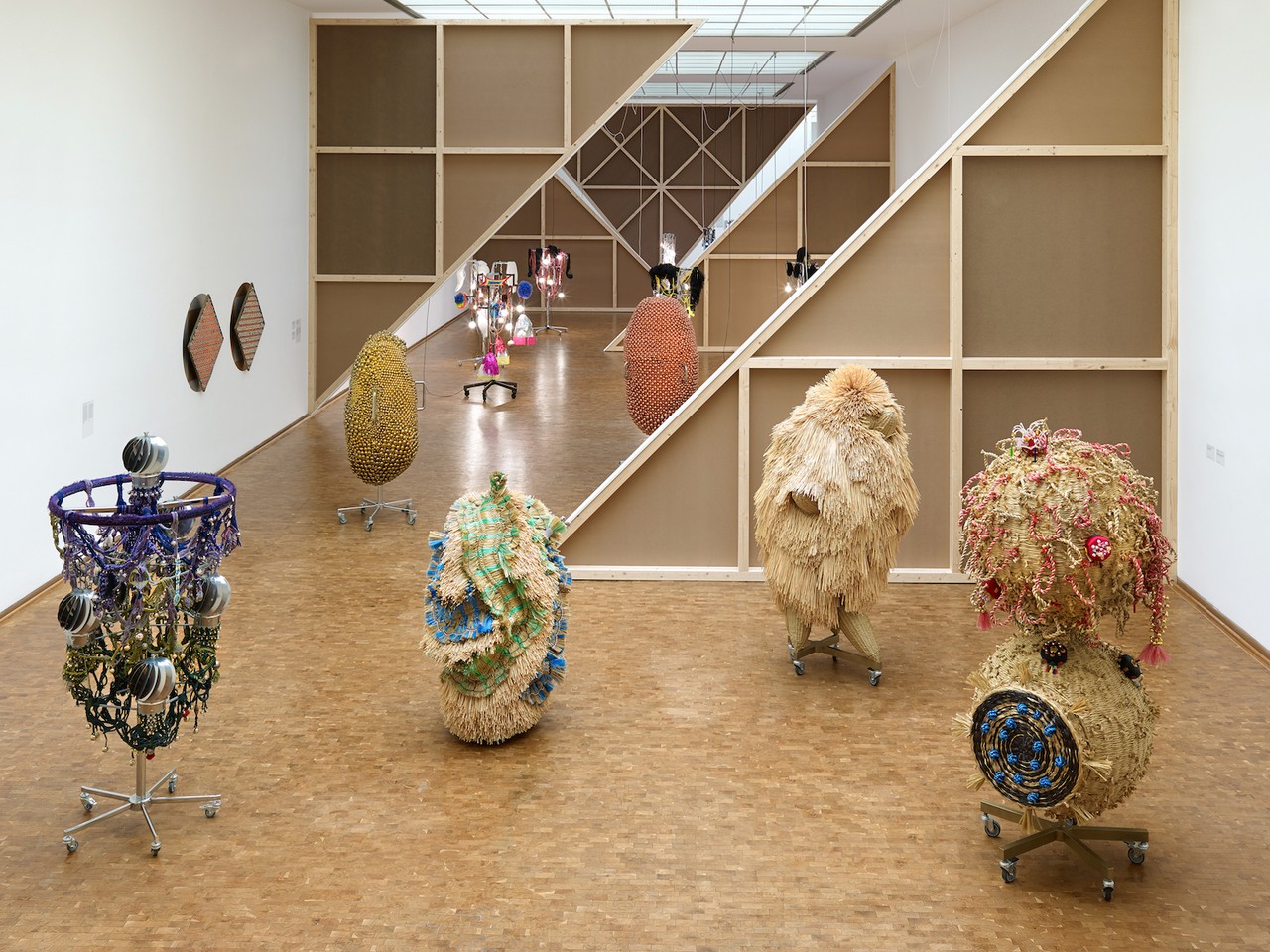 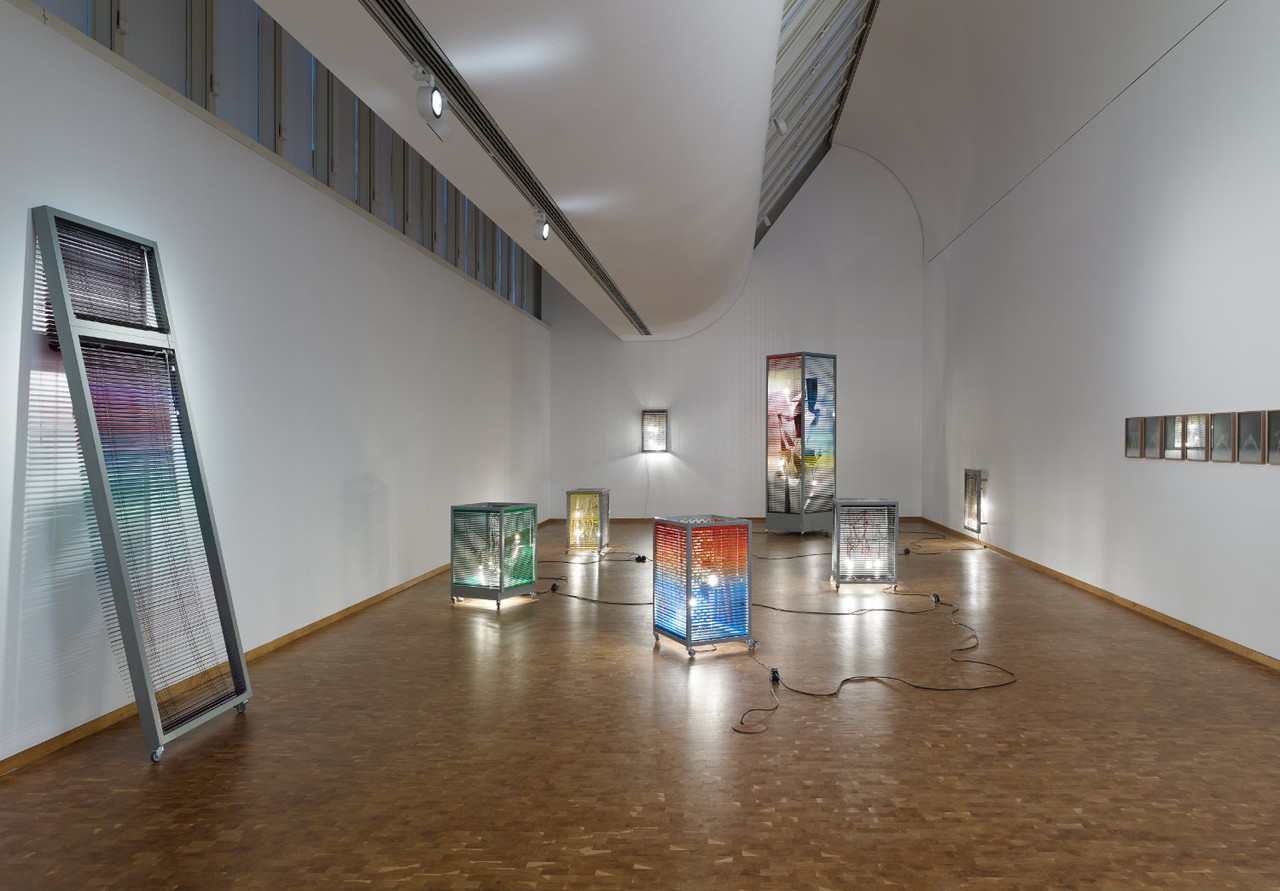 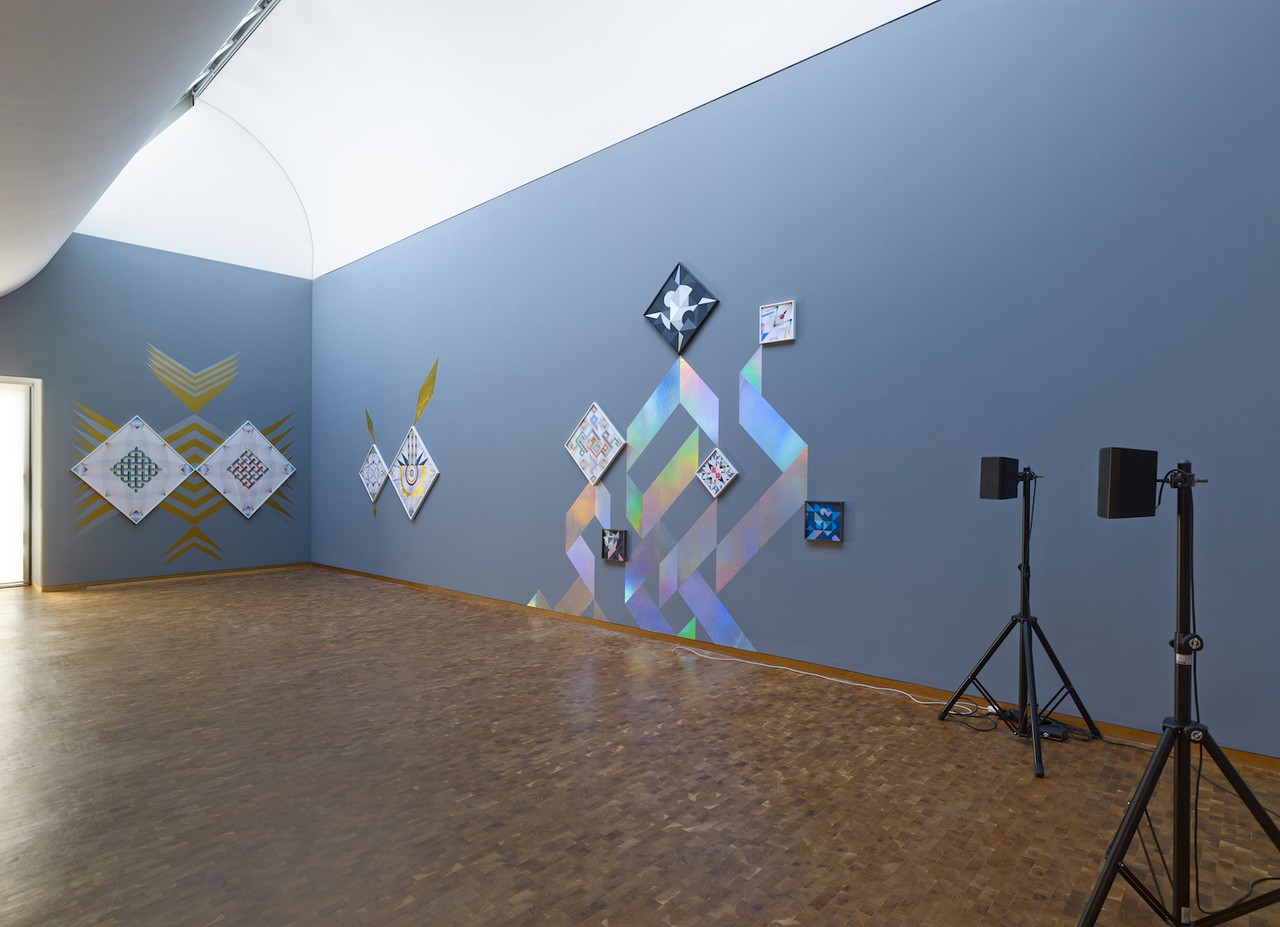 In 2018, the Gesellschaft für Moderne Kunst am Museum Ludwig will recognize Haegue Yang for her extraordinary body of work with the Wolfgang Hahn Prize. The Museum Ludwig will showcase the remarkable versatility of her entire oeuvre in the artist’s first-ever survey exhibition with over 120 works ranging from action-based objects from the 1990s to lacquer paintings, photographs, works on paper, video essays, anthropomorphic sculptures, performative pieces, and large-scale installations.

The abbreviation ETA stands for “estimated time of arrival,” among other things. Thus, the exhibition title points to an artistic career in transit and the constant itineracy of an artist who maintains studios in Seoul and Berlin and has exhibited internationally since 1994.

The exhibition will begin with Yang’s first venetian blind installation from her 2006 Series of Vulnerable Arrangements—the 2006 Version Utrecht, an immersive and sensorial experience unfolding from a composition of various materials and the simultaneous use of wind, scents, light, and heat. Within this arrangement, video essays document the artist’s travels through cities around the world and convey feelings of home, isolation, and dislocation associated with her itineracy in quite personal commentaries.

One of the first rooms will feature early and in some cases reconstructed works that reveal Yang’s examination of Western art history from Duchamp to Fluxus and tendencies of Institutional Critique as well as the then-current Context Art. As in her first few exhibitions in the 1990s, these works will be staged or ironically shown in display cases, like in an archive.

A central part of the exhibition is Storage Piece. This key work was created in 2004 out of financial need and an acute lack of space as a collection of packaged works on shipping pallets. The work has since been exhibited in several configurations, and its arrangement will also change at regular intervals in the Cologne exhibition—a reflection of Yang’s consideration of transitory states. Furthermore, it was an important contribution to Conceptual Art in the mid-2000s, as well as a striking commentary on a rapidly changing art market and the increasing commodification of art.

Yang’s well-known anthropomorphic light sculptures will be represented in the exhibition with the Medicine Men series from 2010, among other works. These consist of a variety of materials: functional and industrially manufactured everyday objects such as clothing racks, light bulbs, electric cables, and party wigs. Yang herself refers to these sculptures as “shamans” or “transvestites,” thus pointing to the ambiguous gender and social roles that medicine men take on in nature religions. They also pose questions of exoticism and cultural identity which run throughout Yang’s work.

Yang will also continue her series VIP's Union (2001–) with a version for Cologne. Well-known local figures—VIPs from different areas of society such as culture, sports, business, and politics—will be invited to lend their favorite chair or table for the duration of the exhibition. This collection of different pieces of furniture will portray the local society and its domestic preferences.

With her diverse oeuvre, Yang adeptly avoids clear attributions. Her works demonstrate elements of Institutional Critique and are conceptual as well as rich in cultural and historical references, while simultaneously sensually complex and emotionally charged. Across over 1500 square meters of exhibition space, this comprehensive retrospective’s spatial scenography will echo the conceptual dynamics of the works, lending the exhibition the quality of a Gesamtkunstwerk—harmonious yet full of dissonances.

Haegue Yang (*1971 in Seoul) lives and works in Berlin and Seoul. Since 2017, she has been teaching at the Städelschule, where she herself began her studies under Georg Herold in 1994. She was twice represented at the Venice Biennale in 2009 (in the programmatic exhibition fare mondi and in a solo exhibition in the Korean pavilion), and in 2012 she participated in dOCUMENTA (13). Her recent solo exhibitions were held at the following institutions, among others: Kunsthaus Graz (2017/18), KINDL – Centre for Contemporary Art, Berlin (2017/18); Centre Pompidou, Paris (2016); Serralves Museum of Contemporary Art, Porto (2016); Hamburger Kunsthalle (2016); Ullens Center for Contemporary Art, Beijing (2015); Leeum, Samsung Museum of Art, Seoul (2015); Bonner Kunstverein (2014); Aubette 1928 and Museum of Modern and Contemporary Art, Strasbourg (2013); Haus der Kunst, Munich (2012); Kunsthaus Bregenz (2011); New Museum, New York (2010); and Walker Art Center, Minneapolis (2009). In 2018 she is also participating in the 21st Biennale of Sydney and the 10th Liverpool Biennial. Her first retrospective in North America will be at the Museum of Contemporary Art in Los Angeles in 2019.

A catalogue raisonné Haegue Yang: ETA 1994–2018 will be published alongside the opening of the exhibition with a text by Chus Martínez, a conversation between Haegue Yang and Yilmaz Dziewior, and a biographical essay by Leonie Radine.

With the Wolfgang Hahn Prize, the Gesellschaft für Moderne Kunst am Museum Ludwig e.V. honors exceptional contemporary artists on an annual basis. The prize money of up to 100.000 euros goes to the acquisition of a work or group of works by the artist for the collection of the Museum Ludwig. The award winners are also honored with an exhibition in the museum.
www.museum-ludwig.de