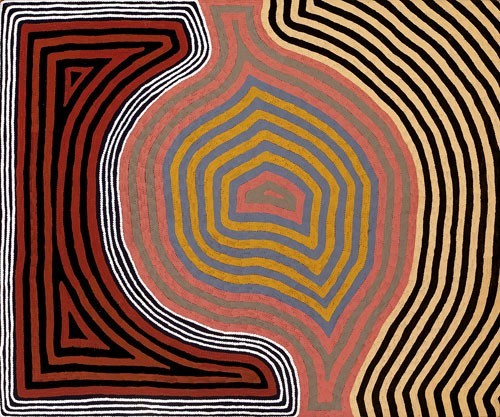 In the exhibition "Remembering Forward", the Museum Ludwig will present works by nine outstanding artists whose work spans the last forty years of contemporary Australian Indigenous painting in the Central and Western Deserts and the Kimberley region. Bark paintings from Arnhem Land will complement this selection. These works were acquired by Tony Tuckson and Stuart Scougall for the Art Gallery of New South Wales around 1960, thus receiving early recognition as equals of Western works of art. Contemporary Aboriginal art, despite regional differences, has two central characteristics: the artists' binding relationships to their traditions and myths on one hand, and a visual language that appears highly modern to Western viewers on the other. The paintings thus exist within a peculiar tension between tradition and modernity, past and present, and localization and globalization. The themes of the exhibited images typically refer to "Dreamtime" stories, that is, stories from the mythological time in which the land and all living things were created. In Aboriginal culture, the Dreamtime encompasses past, present and future. Since the early 1970s, artists have increasingly made use of modern materials such as acrylic paints and canvas. Their visualized Dreamings thus left the realm of ritual and were bought and sold by galleries and collected by museums. In this way, the artists became significant intercultural ambassadors who also decisively influenced the process of receiving civil and land rights. In working with the new materials, many artists arrived at highly innovative visual forms that, at first glance, recall abstract Western painting. At the same time, however, they are concrete realizations of the land, and they show the connection of land and Dreaming on a direct and sensual level. Some artists, those from the Kimberley in particular, have also depicted the cruelties that accompanied their land's colonization.

For Western viewers these paintings represent a new challenge to established modes of looking and understanding. That which appears to be an abstract image must in fact be understood as the depiction of a place and its history. The artists often make use of a visual technique that has no horizon line, instead showing the land from above. Layers of paint can also be layers of time. Yet these works cannot be understood purely emblematically, or classified by their iconography. Some artists have transformed their references to body painting or sense of the land into strong colours and gestural brushstrokes, thus distancing themselves from any specific narratives. But a complex and specifically Indigenous way of dealing with a place's and the world's structure, time and space, narration and abstraction, showing and hiding, is always visible. This radical consideration and reworking of painting's possibilities makes these works central contributions to contemporary art.