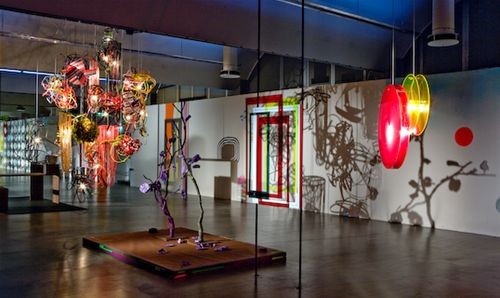 As if in a march past, in this installation Tobias Rehberger presents some 40 works spread along 70 metres. Paying no heed to chronology, he has simply placed works from 15 years of artistic production next to one another: chairs reminiscent of designer classics, his ‘vase portraits’, artificial limbs mounted on plinths, paper flowers with a Japanese ring to them, lamps made of Velcro tape, objects made of Perspex, video racks... Lit by spotlights, the works cast their shadows onto the white wall facing them. The old works shine out in new glory, allowing a new work to come into being: a mural made of light, shadows and colour.

With this installation, originally devised for the Stedelijk Museum CS in Amsterdam and now redeveloped for Museum Ludwig, Tobias Rehberger transposes three dimension into two. By combining this play of light with painting for the creation of his mural, he keeps the dependency between the objects in space and what is depicted on the wall – for if the lights went out the mural would more or less disappear.

The exhibition has been taken on from the Stedelijk Museum CS in Amsterdam.
www.museum-ludwig.de