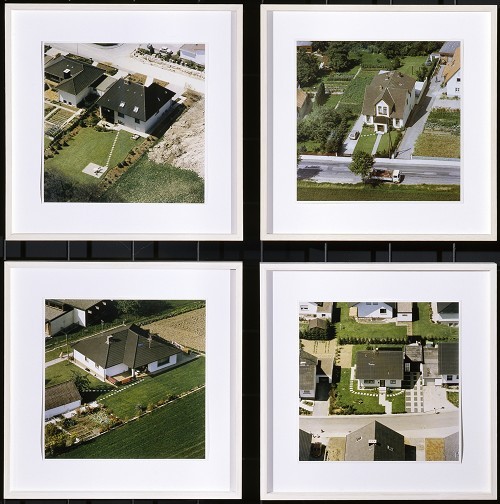 In the mid-1990s, urban planner and architect Thomas Sieverts coined the term Zwischenstadt, or “trans-urban-city,” to describe rampant urban sprawl. But it was actually photography that first drew people’s attention to this theme as early as the 1960s and 70s, one that had until then not been considered worthy of depicting. Instead of heroic metropolises or sublime natural landscapes, artists such as Ed Ruscha and Dan Graham, or photographers like Robert Adams and Lewis Baltz, portray gas stations, parking lots, suburban developments, motels and industrial parks. They show suburban areas and landscapes that are just taking shape, drawing attention to the anonymity of vernacular architecture and prefabricated homes. The exhibi-tion follows their lead, presenting photographs from the collection of Museum Ludwig as well as works by the next generation of artists. These examine not only the local built environment, but also its psychosocial influ-ence on inhabitants. The exhibition brings together works by Bernd and Hilla Becher, Joachim Brohm, Chargesheimer, Mark Dion, William Eggleston, Jeanne Faust, Andreas Gursky, Douglas Huebler, Joan Jonas, Manfred Pernice, Peter Piller, Robert Smithson, Thomas Struth and Thomas Ruff.

Bernd and Hilla Becher photograph industrial architectures according to a fixed system, and then combine the images to form group pictures. Using the same method, they also document workers’ housing. In addi-tion to focusing on the artistic impact of their images, the Bechers also take an interest in how the relation-ship between form and function varies from region to region. Their students Thomas Struth, Andreas Gursky and Thomas Ruff by contrast set out to explore the anonymity and interchangeability of postwar buildings, which have lost their anchoring in both space and history.

A second focus of the exhibition is the portfolio Los Alamos by William Eggleston. The portfolio contains a selection of photographs the artist made during his travels from Memphis to the Mississippi Delta, to New Orleans, the Pacific Coast, southern California and Las Vegas. Along the way, he took pictures of signs, cars, fast-food restaurants, plastic jewelry and tourists. With his “democratic procedure,” Eggleston declares everything to be equally worthy of a picture. This allows him to avoid classic composition with a central motif; instead, human and object are lent equal significance – the subject retreats behind the apparatus.

In the 1960s and 70s, growing ecological awareness began to spread in the USA. Robert Smithson’s ongo-ing study of changes in natural processes for which he holds human beings responsible is one indication of this early environmental movement. His film Spiral Jetty shows excerpts from the construction of his Land Art project at Utah’s Great Salt Lake, near an obsolete industrial complex. The spiral form made of piled-up stones stands for rebirth, growth and infinity. With his Ruhrlandschaften (Ruhr Landscapes), Joachim Brohm documents the structural transformation of the Ruhr region from industrial zone to recreational landscape. Shot from an elevated vantage point, his photographs take in sweeping vistas, whether showing swimsuit-clad party makers at a barbecue, a group of tents, or colorful cars lined up in a parking lot. Traces of human interventions in nature are everywhere: a trench has been dug, earth heaped up and new trees planted. Brohm shows an interim state between nature and culture, a no-man’s-land being conquered by the urban agglomeration.

The interactions between city center and periphery were already a motif for Chargesheimer in 1974, in his photo series Köln 5 Uhr 30: in vertical format and using an extreme wide-angle lens, he captures places in the city of Cologne that lie on the margins of our awareness. Contrasts between old and new, between the discarded and the anonymous, between subway entrances, parking lots and pedestrian zones, collide, and develop in their contradictions their own brand of aesthetic appeal.

Manfred Pernice draws inspiration for his sculptures from vernacular architectures like the ones described above. The pieces are derived from built spaces (industrial facilities, canals, highrises or weir systems) or volumes (cans and containers) whose form is determined by their respective function. Because the memory of these functions clings to the objects, they summon dense fabrics of association. Pernice’s work Hangelar is based tongue-in-cheek on the main airport building in the eponymous town located between Bonn and Sankt Augustin. That this site has been used by Germany’s Federal Border Guard since 1951, and that the flights to Mogadishu in 1978 took off from Hangelar are facts the viewer learns from the documents the artist has included with the work. Pernice is interested in the approximate and indeterminate, and in particular in how these qualities are embodied in the urban topography of the 1970s. Landscapes become here regions without history, while cities are faceless places – open and waiting for someone to come and occupy them.
www.museum-ludwig.de