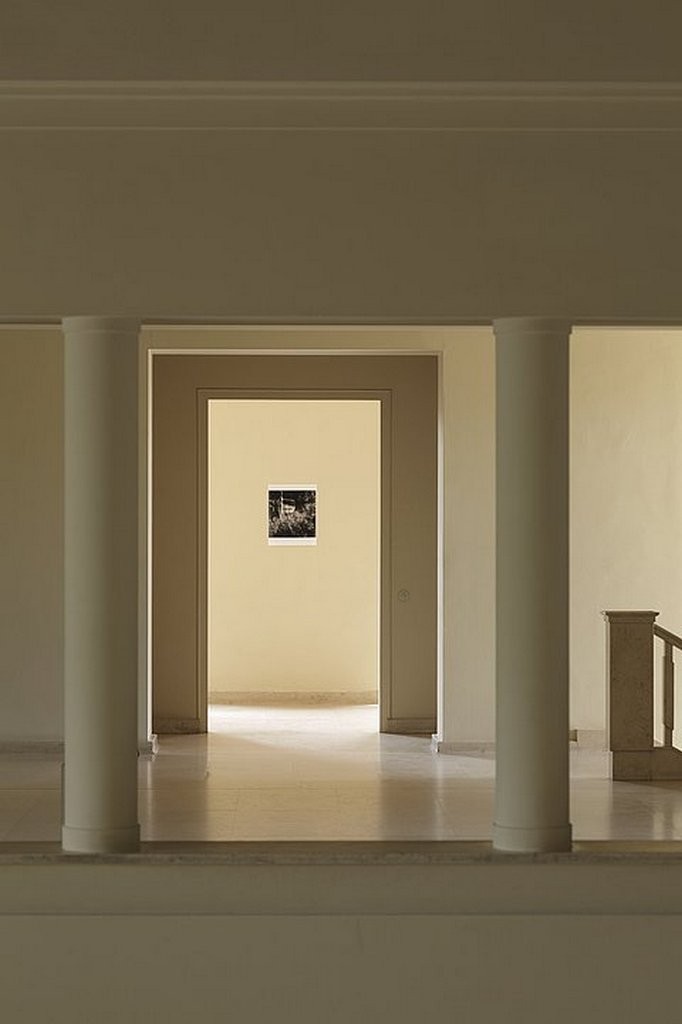 The Gesellschaft für Moderne Kunst am Museum Ludwig will present the 2017 Wolfgang Hahn Prize to Trisha Donnelly. With this prize, which has been awarded annually over the past twenty-three years, the organization will recognize the extraordinary oeuvre of this artist, who was born in 1974 in San Francisco and now lives in New York.

The prize includes the acquisition of a work or a group of works by the artist for the collection of the Museum Ludwig. An exhibition of Trisha Donnelly’s work will also take place at the museum, and a catalogue will be published to commemorate the award. The jury for the 2017 Wolfgang Hahn Prize included this year’s guest juror Suzanne Cotter, director of the Serralves Museum of contemporary art in Porto; Yilmaz Dziewior, director of the Museum Ludwig; Mayen Beckmann, chairwoman of the Gesellschaft für Moderne Kunst; as well as Gabriele Bierbaum, Sabine DuMont Schütte, Jörg Engels, and Robert MüllerGrünow as board members of the Gesellschaft für Moderne Kunst.

Mayen Beckmann, chairwoman of the Gesellschaft für Moderne Kunst, offered the following statement on the selection of the artist: “The jury was enthusiastic about Trisha Donnelly’s diverse work, which resists interpretation. With sculptures, drawings, performances, films, and photographs, she creates works that lead us as viewers into entirely different spheres of perception. Her consistency and radical approach to questions of aesthetics or reception were an important reason for honoring Trisha Donnelly with the Wolfgang Hahn Prize. This is very much in keeping with the spirit of Wolfgang Hahn, who saw the connection between life and art in the avant-garde.”

Suzanne Cotter, director of the Serralves Museum of contemporary art in Porto: “The Wolf-gang Hahn Prize is one of the most inspiring awards for contemporary artists of its kind, and it is with enormous pleasure that the prize this year goes to Trisha Donnelly. Trisha Donnelly is without doubt one of the most compelling artists of our time whose work offers entirely new ways of experiencing and thinking about form, at once synesthetic and disruptively transporting. As an artist she occupies a position of committed resistance to the easy appropriation of art as something contained and ultimately controllable. At the same time, the extraordinary generosity of her work, that touches on the visual – in particular the photographic –, the spoken, the aural and the physical, is electrifying in its permission.”

Yilmaz Dziewior, director of the Museum Ludwig: “For us as an institution whose mission is to collect contemporary art, the presentation of the prize to Trisha Donnelly is excellent news. I have followed Trisha’s work closely for years; she brings the problem that artists have long worked on—-namely, what the very concept of an artwork means—into the future. Her independence and resistance to all forms of appropriation are essential elements of her work, as is her ability to adjust to the specific exhibition venue and context, only to overturn everything, to dispense with any con-text of meaning, and to directly appeal to the viewer. The Wolfgang Hahn Prize thus once again sets new standards by recognizing an extraordinary and pioneering artist.”

BAUWENS and Ebner Stolz, two local companies in Cologne, will continue their long-term support of the award ceremony in 2017 as well as the exhibition at the Museum Ludwig and the publication. In 2016 both companies agreed to generously support the Wolfgang Hahn Prize for at least three years.

About Trisha Donnelly
Trisha Donnelly was born in 1974 in San Francisco. In 1995 she completed her bachelor of fine arts at the University of California, and in 2000 she earned her master of fine arts at the Yale University School of Art. Since 1999 she has taken part in exhibitions, including solo shows at the Villa Serralves in Porto (2016), the Serpentine Gallery in London (2014), the San Francisco Museum of Modern Art (2013), the Portikus Frankfurt (2010), the Museo d’Arte Moderna di Bologna (2009), the Renaissance Society of the University of Chicago (2008), the Institute of Contemporary Art in Philadelphia (2008), Modern Art Oxford (2007), and the Kunsthalle Zürich (2005). Over the past ten years she has participated in numerous group exhibitions, including the fifty-fourth and fifty-fifth Venice Biennale (2011 and 2013), Documenta 13 (2012), The Quick and the Dead at the Walker Art Center (2009), and Il Tempo del Postino (2007 in Manchester, 2009 in Basel). Donnelly had her first solo exhibition at a museum in Germany in 2005 at the Kölnischer Kunstverein as part of the CentralKunstpreis, which she received in 2004. In 2015 the Julia Stoschek Collection showed Trisha Donnelly’s works in its exhibition Number Ten. The artist was also featured in early exhibitions at Galerie Air de Paris in Paris, Galerie Eva Presenhuber in Zurich, and Casey Kaplan in New York, among others. In New York she gained attention in 2002 with a performance in which, dressed as one of Napoleon’s couriers, she rode up to Casey Kaplan’s gallery on a horse and read a mysterious message. This performance was echoed in 2005 at the Kölnischer Kunstverein, where a black horse was supposedly led through the exhibition hall—an event whose factuality the artist prefers to leave open.

This playful approach to the unknown and the creation of situations in which the viewer must rely completely on his or her own perception without a frame of reference is perhaps one of the most important qualities of Trisha Donnelly’s work. Thus, her partly immaterial works can ultimately only be understood when they are experienced in person. Donnelly’s avoidance of public appearances, explanatory texts, and name giving titles points to a strategy that resists event and spectacle oriented approaches. Rather, it is the inexplicable, things learned or experienced through hearsay which Donnelly seeks to make perceptible in her works. Donnelly once stated in an interview with Cathrin Lorch (Kunstbulletin, September 2005) that she tries to condense things. She went on to explain that every work is created as an experiment and that she searches for patterns that underlie a “mental sculpture.” In addition to the aforementioned CentralKunstpreis, in 2010 Donnelly received a Rob Pruitt’s Art Award and the Prix de la Fondation Luma in Arles, followed in 2011 by the tenth prize of the Sharjah Biennale and in 2012 by the FaberCastell International Drawing Award. In 2011 she was among the finalists for the Hugo Boss Prize from the Solomon R. Guggenheim Foundation.

About the Wolfgang Hahn Prize
Wolfgang Hahn (1924–1987) was a founding member and a board member of the Gesellschaft für Moderne Kunst am Museum Ludwig. A passionate collector who worked as head restorer with a specialty in in painting restoration at the Wallraf Richartz Museum and Museum Ludwig, he became interested in contemporary art and began building a collection in the 1950s. He expanded the col-lection in the 1960s with objects by artists from the Fluxus and happening movements as well as Nouveau Réalisme in Europe. Siegfried Gohr, founding director of the Museum Ludwig, offered the following statement on Wolfgang Hahn in 1997: “Hahn did not ask the probing question of the six-ties regarding the relationship between art and life from the outside; rather, it developed on its own out of his attitude toward art. Hahn lived with art and artists without distancing himself from the bourgeois reality in which he was firmly rooted. He did not demean art as an object, but treated it as part of his life with a persistent energy. His engagement with art was the opposite of aestheticism; to him, who surrounded himself with it, it literally served as a vehicle for experiencing the world.” The Gesellschaft für Moderne Kunst committed itself to this attitude when it named its prize for contemporary art after Wolfgang Hahn in 1994. Today the prize has a maximum budget of 100,000 euros and is meant to honor mainly artists who have made a name for themselves in the art world with an internationally recognized oeuvre but have not yet gained the attention they deserve, particularly in Germany. The prize includes an exhibition organized by the Museum Ludwig with works by the recipient, and in particular a work or group of works acquired for the museum, as well as an accompanying publication.

In 2017 the Museum Ludwig will devote a major exhibition to Wolfgang Hahn’s pioneering collection: Bring Art into Life! The Collector Wolfgang Hahn and the 60s (June 24 – September 24, 2017).

About BAUWENS and Ebner Stolz
Sponsors of the Award Ceremony, the Exhibition, and the Publication
The long-established corporate group BAUWENS develops, plans, and builds residential and commercial real estate projects throughout Germany. Ebner Stolz is one of the largest independent, midsized auditing and consulting firms in Germany. In advising its clients, it distinguishes itself with its multidisciplinary approach, which combines auditing, tax advisory, corporate consulting, and legal advisory services. The BAUWENS group is located in the Rheinauhafen area of Cologne in the same building as Ebner Stolz. For further information, see the websites www.bauwens.de and www.eb-nerstolz.de.
www.museum-ludwig.de