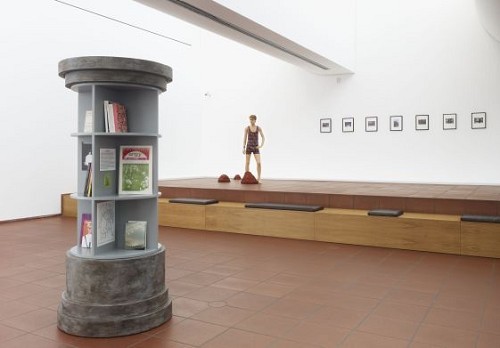 This year’s Wolfgang Hahn Prize will be given to John Miller. The Gesell-schaft für Moderne Kunst awards its prize annually to honor a contem-porary artist whose oeuvre is internationally recognized. Miller’s complex work investigates the wide spectrum of issues ranging from technology and the individual to society which, according to Miller, were anticipated by Concept Art and Fluxus. Presented on the museum’s top floor, a small exhibition assembling sculpture, photography, painting, and audiovisual works will offer an overview of Miller’s work. Born in Cleveland in 1954, the artist has produced a new two-part sculpture for the museum collec-tion. Created from advertisement columns, among the elements Miller used for this piece was a personal ad of a self-made man. After the exhibi-tion, Self-Made Man and photographs from the series Middle of the Day will remain in the Museum Ludwig, forming a representative body of Mil-ler’s work that will extend and complement our holdings.

On the Wolfgang Hahn Prize: