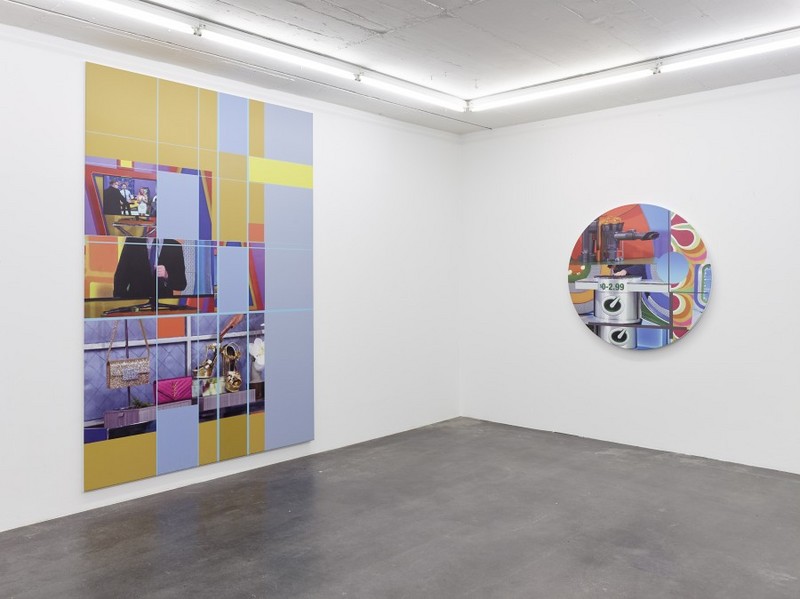 American artist, writer and musician John Miller (born 1954) pursues since the 1980ies (to put it in an old-fashioned way) a kind of “deconstruction” of popular culture, or, maybe more precisely, is reflecting on it in paintings, sculptures and installations that seem to be located in the field of tension between Pop Art and Conceptual Art. His Gameshow paintings that take their subjects from American TV long runners like “The Price is Right” go back to the 1990ies. Thus to a point in time when TV after the euphoria of the post-war years had just begun to enter a long and agonizing period of losing relevance. In this famous ongoing series of paintings Miller plays off the critique of the present, critique of the society, critique of/in art, all on one visual level. The paintings consist of sampled fragments of the broadcasts that are copied directly from the screen. The Oedipal relationship between a good showmaster-uncle type and the participants – he looks after them during their emotional up and down between childish hopes, win and loss of the desired commodity objects, can be regarded as emblematic for a free market economy that is still somehow associated with state care (1). Meanwhile the two systems of capitalism and politics have finally decoupled. While Miller in the beginning painted his compositions and thus made the medium of choice appear “older” than its template on screen, this relation today is reversed. The new thermosublimation prints on polyester smooth the more coarse-grained TV world of yesterday. Pop Art and Concept Art can be regarded as original American genres which Miller confronts with both critique and homage. But the unambiguous “criticality” of his works consists in making their historicality tangible, quasi as critique of critique.

Two generations and the Atlantic Ocean seperate German artist and writer Dominik Sittig from the world of John Miller. Sittig’s pastose paintings of meshed layers of acrylic (formerly oil) paint, in some places puffed out with twines of gaze fabric, could be taken as plainly expressive at first sight. The paintings release a pulse that due to the conflicting vibes of attraction and repulsion often evoke a kind of emotional resistance within the observer. Only if one admits to the high conceptual level of the works, one recognizes that Sittig does not practice pure expression, but on the contrary its critique by means of its conscious staging. In this process the paintings gain a kind of biographical age that has nothing to do with Sittig’s personal life, but that objectifies the (art-) historical time that it (life) contains. In one of his essays Sittig points out that if one says Kippenberger is an artist of the 1980ies, this only is half the truth. Kippenberger, born in 1953, was as much an artist of the 50ies, 60ies and 70ies. Sittig’s paintings are not a retro-gesture that ironically refers to the Informel. His multi-layered mish-mash quotations of expressive European painting on the one hand can be regarded as a critique of the abstract expression that denies its historical dimension and that – this is more obvious than ever – is nothing but commodity. On the other hand this critique focuses on the historicality of (art-) historical conceptions as such.

Both positions USA / Europe share the same critique of the critique of history argued in the medium of art – and this impression emerges instantaneously when entering the exhibition space.

(1) “The quiz show or game show allows for the symbolic circulation of goods within a family that is not a family; it creates a surrogate “family” out of an arbitrary set of contestants, the studio audience, and the (vicarious) broadcast audiences.” John Miller “Playing the Game,” a/drift, Center for Curatorial Studies, Bard College, Annandale-on-Hudson 1998, p. 93–95; republished as “Das Spiel spielen: Was machen Sie sonntags um zwanzig vor sieben?,” Subtropen/Jungle World, Berlin, no. 32, August 1, 2001, p. 7.
www.galerie-nagel.de