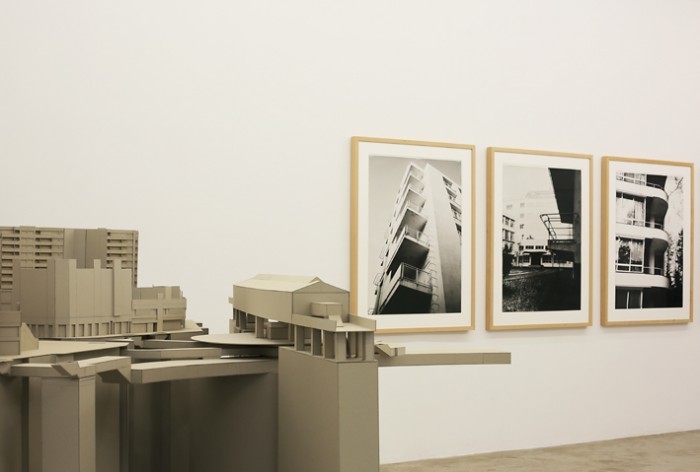 The exhibition project BEYOND ARCHITECTURE is centered on the diverse interconnections characterizing the relationship between architecture and history. The complex intertwining of historical constellations and architecture, as it was not least marked in the 1975 analysis of the panopticon by Michel Foucault, therefore serves as a primary example. Related to this way of reading architecture, especially modernist buildings are also repeatedly cited as a materialization of former utopian and social concepts. But to what extent do such contexts experience a continued consolidation or displacement via the artistic staging of architecture? And to what degree does the artistic representation of architecture go beyond the historical roots of the architectural role model? BEYOND ARCHITECTURE examines this complex topic in depth by presenting artistic positions and works that negotiate the historical connotations of architecture — and especially those of modernist architecture — in different ways.
Serving as a starting point are the photographic works of Karl Hugo Schmölz, Irmel Kamp, and Günther Förg. In presenting architecture photographically, each of these positions follows specific historical paradigms. For instance, in his photo series on the WDR radio broadcast building erected in Cologne in 1948, Schmölz not only addresses an architectural structure whose modernist form aggressively seeks to distance itself from the pompous neo-classicism of the recent Nazi past, but, in the same instant, his depictions of glass facades, an elegantly curved interior design, and soaring staircases concentrate throughout on themes that hold a liberal cultural viewpoint, democratic transparency, and a resurgent optimism about the future as essential for the onset of a new beginning. In contrast, in her diverse photo series, Kamp focuses on the international dissemination of classic-modern architecture as it not least was caused by the deep fault lines of the two world wars. If, in their documentary qualities, Kamp’s photographs follow the various experimental modifications of Bauhaus style in the context of the new geo-cultural conditions, then, the almost sculptural presentation of the buildings at the same time raise the objects to the level of monuments, which not least vouch for the historical persistence of modernist ideals. Although Förg’s photographs of Finnish architect Alvar Alto’s buildings also concentrate on a typical representative of the International Style, the subjects in his works are portrayed in an entirely different manner. In contrast to the still mainly high-resolution and isolating pictorial strategies of Schmölz and Kamp, Förg employs image detail, angle, and resolution in the context of everyday life to exactingly convey the self-elevating idiosyncrasies of modernist buildings. It is this very contrast that also allows him to successfully capture the strange intermediary state in which the still vital architectural designs of modernist buildings are increasingly at risk of slipping into the status of historical relicts.
Building on these themes, the younger positions of Andreas Bunte, Larissa Fassler, Cyprien Gaillard, Philipp Noller, and Mike Kirchner further the artistic investigation of the relationship between architecture and history in a wide range of media. For instance, Bunte’s filmic work from 2012, Welt vor der Schwelle (World on the Threshold), traces the ideological character of religious architecture in Germany following the far-reaching impacts of the Second World War. With his strategic recourse to a narrative structure typical of scholarly documentary films, he succeeds in a seemingly objective manner in analyzing and making evident the new relationship between individuality and religious architecture—and thus also the new relationship between man and the concept of the divine. In contrast, in her work Kotti, Fassler translates the location of Kottbusser Tor in Berlin—widely known as a focal point of multiculturalism, political activism, and impending gentrification—into a room-scale sculpture made out of cardboard. But if the typical purpose of classic architectural models is to present planned buildings in three-dimensions, then Fassler turns this principle on its head given how the sculptural presence of her work focuses on the public and negative space concealed by the existing architecture as well as on its historical content. The already mentioned aspects of an architecture marked by disappearance and decay and a character that dominates its immediate environment are also essential reference points for the artistic work of Cyprien Gaillard. In using scraps of white paper to eliminate the architectural structures within the landscape scenery of old postcards in his ongoing series of works titled New Picturesque, he succeeds in resolutely releasing the images from all specific historical contexts as well as critically presenting the well-established concept of the ruin as a nostalgic-romanticized pictorial element. However, in his film Desniansky Raion, presented as a triptych, Gaillard envisions the modernist residential buildings once initiated as utopian experiments as de facto locations of destruction, violence, and anachronism and thus strikingly illustrates the dystopian reversal of their originally inherent ideals. Furthermore, in their documentary film, artists Philipp Noller and Mike Kirchner examine the complex personality of the architect, publisher, and architectural photographer Werner Blaser. This personal look back on Blaser, who is now ninety-years old, not only opens up a comprehensive view of recent western and eastern architectural history, but its account also offers a range of implicit reflections on the authentic concepts of the twentieth century’s great architectural personalities.
Additionally, artists Horst H. Baumann and Martin Weidemann complement the exhibition context with two site-specific works based on a direct interaction with actual architecture. The temporary installation by Horst H. Baumann, who originally hails from Aachen, uses a green diode laser to connect the ILT on the new Melaten campus with the Lousberger Drehturm, the Ludwig Forum, and the NAK. Not only does his work link locations that play an important role in his own career, but, with science and art, he also creates a relationship between two essential contexts that have proven fundamental to Aachen’s urban identity. Martin Weidemann, by contrast, has created for the exhibition a two-color folio work on the glass façade of the NAK foyer. Referencing early modernist abstraction, Weidemann’s aesthetic probes the possibilities of using graphic elements to enhance architectural design while simultaneously unleashing a transcendent tension between image surface and sculptural space.
www.neueraachenerkunstverein.de