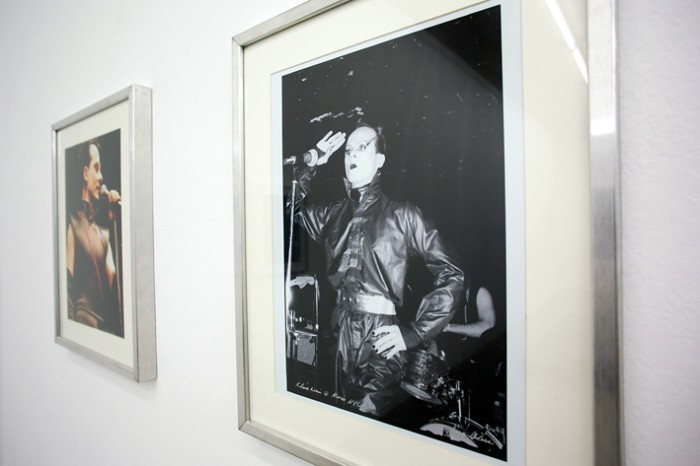 The exhibition ‘Klaus Nomi – 2013′ at Neuer Aachener Kunstverein approaches the phenomenon ‘Klaus Nomi’ rather through a documentary and visual research than through the form of a retrospective. Even though Klaus Nomi, who was trained as a professional counter-tenor, died thirty years ago, his way of self-staging is still significant today.
Nomi’s mixture of opera and pop, as well as his theatrical stage-décor during his concerts and his over-stylised costumes, made him a precursor of today’s generation of musicians and performance artists.

The exhibition focuses on three aspects: Documentation, reception, and positions of contemporary art. Interviews with contemporary witnesses were recorded especially for the exhibition and are now running as a loop on the ground floor. These interviews, for instance with artist Wolfgang Staehle or filmmaker Ulrike Ottinger, who staged the music-play ‘Hommage à Klaus Nomi’ in 2008, give an impression of the creative scene in the East Village and New York City at the end of the 1970s until the beginning of the 1980s. In other interviews and statements, (e. g. with ‘Chicks on Speed’-member Melissa Logan or photographer Jürgen Klauke) questions of self-staging are being discussed. Another focus of the exhibition lays on the reception of the phenomenon ‘Klaus Nomi’ through media and its effects. Documents that are widespread on the Internet can be seen as originals in the exhibition, such as some of Anthony Scibellis photographs that show Nomi in staged poses at the beginning of the 1980s, or a number of photographs that George DuBose took during Nomis early performances in some of New York’s underground clubs. During the first episode of Thomas Gottschalks ‘Na sowas!’ in 1982, which is also being shown in the exhibition, Nomi was for the first time presented to a large German audience. Alongside documents that illustrate the reception of Nomi during his lifetime also stand references of the present-day (such as an episode of the WDR radio broadcast ‘Zeitzeichen’ about Klaus Nomi).
Through several cross references, that can be found between the different documents presented in this exhibition, the different elements of the exhibition are being connected.

Nomi and his oeuvre play an important role in the ongoing debate about self-staging and performance. Corresponding to that, the exhibition itself includes an element of process. It presents different ways of reception of the phenomenon ‘Klaus Nomi’, and at the same time allows to position it within the context of art.

The supporting program around the exhibition also focuses on performance: During the opening night, sound performer Xavier van Wersch gave a concert. In the course of the exhibition another concert (‘Hall & Rauch’), a performance (Martin G. Schmid) as well as a screening of Andrew Horn’s documentary film ‘The Nomi Song’ and a panel discussion will follow.

The exhibition ‘Klaus Nomi – 2013′ is the first of three exhibitions that evolve around performance and staging at Neuer Aachener Kunstverein. The upcoming exhibitions will show Patrycja German and Josephine Meckseper.
www.neueraachenerkunstverein.de