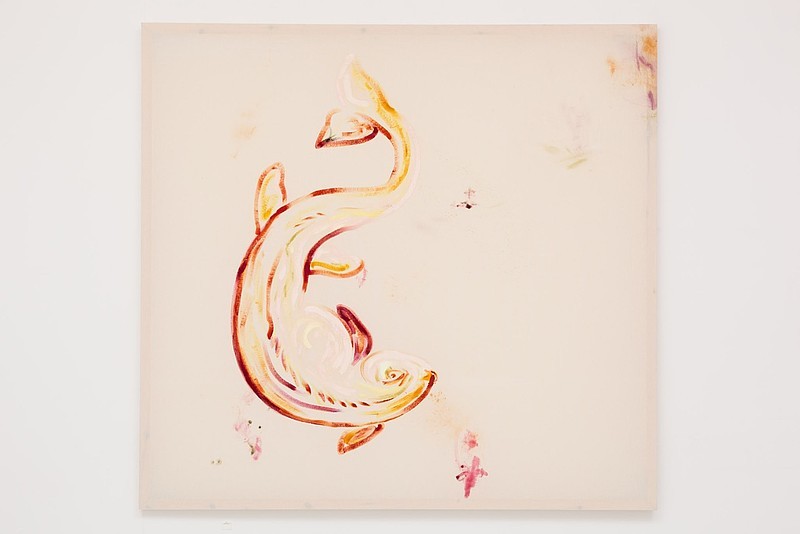 Anna Zacharoff works across a broad range of media which includes painting, sculpture, writing, video and performance. A recurring theme of her output features life on the ocean floor.

The paintings of recent Städelschule graduate show sea creatures such as mussels, fish, crabs, snails and turtles that are rendered in oil and pigment. The creatures Zacharoff depicts seem disproportionately large such as small fish that adopt a human scale or crabs which take on the size of sharks. The shift in scale means creatures are presented to the viewer equal in size and rank.

Such creatures are often shown isolated against bare canvas, removed from their natural environment and placed out of context. Large sections of her paintings remain as blank raw canvas, except for small scuffs and blemishes. She relinquishes primer as well as backgrounds for her motifs and places little value on creating the illusion of a pictorial space. Instead she prefers infinite spaces without architecture as a confining category. The emptiness of the canvas can thus be read as the vastness of the ocean.

Her fictional artistic writings have been published in the anthologies Dysfyction I (2013), Dysfyction II (2015) and Pure Fyction (2016). She also worked on the production and execution of performances at Portikus (HAMLET, mise-en-scéne, 2012), Frankfurter LAB (Impure Fiction, 2013) and Frankfurter Städelschule (Romeo and Juliette, 2015).

Anna Zacharoff (*1987, Stockholm) studied at the Academy of Fine Arts – Städelschule, Frankfurt am Main under Professor Michael Krebber and at the Royal Academy of Art in Stockholm under Professor Ann-Sofi Sidén. She graduated in 2015 and has taken part in numerous exhibitions including solo presentations at Neue Alte Brücke, Frankfurt am Main, Vilma Gold, London and STANDARD (Oslo). Regular Co. at Nassauischer Kunstverein Wiesbaden is her first institutional solo exhibition. She currently lives and works in Brussels, Belgium.
www.kunstverein-wiesbaden.de