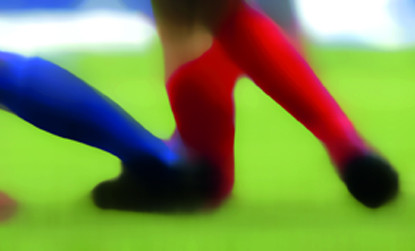 The World Cup 2014 in Brazil begins on June 12. For a good month football will override at least temporarily space and time. Millions of people worldwide will suspend their usual daily routine and indulge in the 90-minute rhythm of the games. Time plays no role any more, when people of all time zones keep track of a game at the same time, whether well before dawn, at noon, or late in the evening. The weekend is temporarily no longer free; holidays can suddenly become mourning days, depending on whether one’s own country has just been eliminated.

To football that reflects life, nothing human is alien. It is attributed with the ability to unite people, it is regarded as a topos of fair play, of sports spirit and even religious echoes can be identified. Like anything else in life, football also has its dark sides. Not only enthusiasm and exuberance can be found in the field of sports but also violence, oppression, and exploitation. And although from the venues of the World Cup, the images of the »official« football will find their way into each so distant corner of the planet, this usually remains a one-sided communication. What do we know about the people in these places who share our time and rhythm for the time of the broadcasted match?

The thirteen artistic positions invited for the exhibition focus exactly on these neglected places, on the stories on the periphery. The Nassauischer Kunstverein Wiesbaden hosts the exhibition in cooperation with the Goethe-Institute in Rio de Janeiro. Artists and film makers from Latin America, Germany, Austria and China have come together and present their very personal views of the world. However, football as a foil and unifying element of the work remains ever-present.

The duo DIAS & RIEDWEG have found the primordially football on a nightly football field of a favela in Rio de Janeiro. With the extreme slow-motion and the accompanying music their »peladas noturnas« acquires grace and charm that evoke associations with classical ballet. Also SEBASTIÁN GORDIN retraces the real football when he has a try as a goalkeeper on a back country football field. MUU BLANCO of Venezuela seeks violence, both on the field and in the stands, and he turns brutal scenes, which he found on the Internet, into abstract images full of beauty, in which the sport appears only fragmentary. »603 football field«, with a wink ZHANG QING takes position to the prevailing lack of space in the rapidly growing Chinese cities.

Six ceiling-cameras film a complete apartment, in which two teams of three players plus a referee play a football match. SIMON GUSH shows that soccer can thrive under the most adverse circumstances and in the most unlikely places. Immigrants play a match on the tracks a railway yard near Ghent. The religious glorification that the game and sometimes individual players meet with, determines the photography by PAULA DELGADO. In his video animations SANTIAGO TAVELLA pursues his own path between a specific story and abstraction. The floor plan of the first World Cup Stadium from 1930 in Montevideo serves as a foil for his playful alienation of the field lines. In the video »Centrojá« by the Band BAJOFONDO, time and spatial levels mix: the original track with the traditional Tango from the suburbs of Buenos Aires mixes with modern electro sounds. MARINA CAMARGO leaves the field of typical football connotations, creating in her film »Together« a calm and serene atmosphere of two youths, who are playing with an American football on a foggy New York beach. In the photos of the native Afghani LELA AHMADZAI, football has a social and political meaning. The women of the Afghan national team train under military protection; it is an act of female self-assertion. The same medium, photography, is used also by MICHAEL WESELY. In his long exposures of fan pubs, stadiums and public viewings, football appears as a linking entertainment. In GIANFRANCO FOSCHINO work the ball fully looses the role of the protagonist. Half-naked children in a backyard show a conspicuous lack of interest in the ball and are chopping firewood with a huge axe instead. The vibrating noise from a stadium is finally captured by LUKAS LIGETI in his sound installation.
www.kunstverein-wiesbaden.de