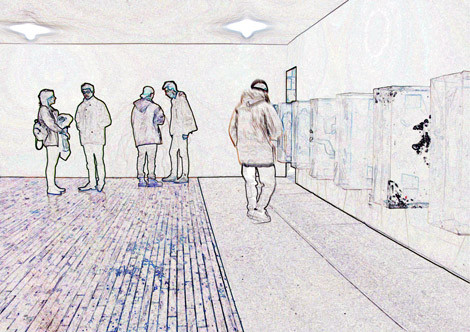 "Henke's cantilevered sculpture, made with materials like plastic and construction hardware, are minimalist configurations transformed into something ghostly, strange, un-artlike. With images of statuary printed on their surfaces, these objects transform into carriers of information outside themselves, three-dimensional JPEGs, texts from the future-past."
– Jerry Saltz, art critic, critic’s pic, New York Magazine, 01/2013, New York

"She said something like: don't let me walk the stairs again as if gustav vigelands self-portrait in hardest granite pointing its finger to its head a certainly well defined individual forcing its habits to congregate with above mentioned description of how to behave as the owner of a soul exposed to sun and viewers and so on."
– Felix Riemann, artist and writer, text for Real Fine Arts, 12/2012 New York

"This solo exhibition by Matias Faldbakken reflects the artist ́s on-going interest in transforming an existing language of forms related to a particular period in modernism. For this specific project, Faldbakken has sourced iconic sculptures created in Norway in the 20th century to carry out a condoned vandalism...The works in question are sculptures by Gustav Vigeland (1869–1943) and Arnold Haukeland (1920–1983)...To understand the title of his show one have to read „Portrait Portrait Of Of A A Generation Generation“ very slowly. Falbakken says: “Paradoxically, as you actually take away information by adding the same thing to it.”
– Ive Stevenheydens, critics and writer, AGENDA magazine blog, 12/2012

During a stay in Oslo Lena Henke discovered the Norwegian sculptor Gustav Vigeland. Located in the local Frognerpark, the Vigeland Sculpture Park is a monumental and comprehensive group of 212 sculptures, which was built between 1924 and 1943. The main motive of the figures in the Park is the life cycle of the people. Vigeland, whose naturalistic oeuvre was influenced by Auguste Rodin, relinquished the rights to his sculptures to the Oslo town magistrate. In exchange the city provided the livelihood for the artist.

Lena Henke's From One Artist to Another, on view at Nassauischer Kunstverein Wiesbaden, is an adaptation of her solo exhibition she said something like: don't let me walk the stairs again I said: but you live there, exhibited at Real Fine Arts, New York in December, 2012. For the NKV she will use the immenseness and mass of the naturalistic working sculptor of old Europe as two-dimensional, photographic material source for her own sculptural work again. Printed on plastic foil and folded into a cubic form these new object will be hung on the wall, presented like pictures in a classic exhibition. The printed sculptures are used as symbols which stand for longevity, lasting value and timelessness, thus, contrasting the commonness of the plastic bases. The sculpture bases represent plastic bags, which hint at consumerism, superficiality and the sometimes unheard messages of every-day products. Gravitas and massiveness of the printed motifs are counteracted by the lucency and lightness of the plastic so that massiness is just existing meaningfully in mind.