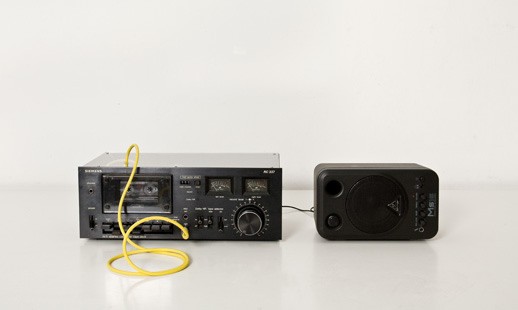 The title of the exhibition Rinnzekete bee bee nnz krr müü, a line from the phonetic poem Ursonate by Kurt Schwitters refers both methodologically and onomatopoeic to the mechanisms of the works shown. Clear parallels to Dada and Fluxus, which are found in the working methods and motives of the works shown, call for a comparison of the historical embedding. As in the transitional phase after the First World War, we find ourselves again in a social and political area of conflict, along with a questioning or even rejection of previously valid value systems. As a result, the work of art is negated in the conventional sense of the time, as is the case today, and traditional forms are further developed with satirical irony. Everyday objects are freed from their original purpose by human intervention. Comedy becomes the means to process the seemingly incomprehensible.

The course of the exhibition combines sculpture, video and installations. Together, they question mechanisms and systems understood as reality. Automata, which apparently have no added value and rather exist just for "functioning", purposefully pursue their pointless task. With humor, social constraints, bureaucracy, liquidity, and efficiency are ironized by the misappropriation of their representative symbols. The purpose of the object is negated and finally led to the point of absurdity. Immanent paradoxes and contradictions compel the viewer to question the perceived.
www.kunstverein-wiesbaden.de