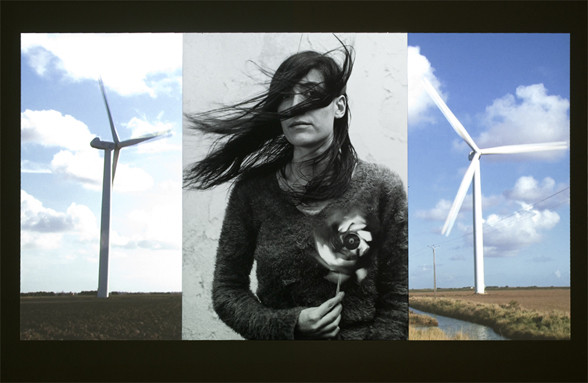 Nathalie Obadia is delighted to present Triptyques Atypiques , Agnès Varda’s first solo exhibition at her Parisian gallery, but the third collaboration with this emblematic Nouvelle Vague director who likes to describe herself as “an old filmmaker who has become a young visual artist.”

While LACMA (the Los Angeles County Museum of Art) is exhibiting a set of pieces, including a cabin made of film stock, through June 2014, under the title Agnès Varda in Californialand, Galerie Nathalie Obadia is presenting recent works by this artist, a bold combination of photographs, videos and various materials. Triptyques Atypiques refers to the number 3 and to the old triptych paintings that Agnès is fond of.

The Portraits à volets vidéo comprise a central image, a photograph, generally in black and white (gelatin silver), printed and hung on the wall, with videos projected on either side. The point is to juxtapose the fascination exerted by still or fixed images at a given moment and the energy exuded by moving images directly linked to the central figure:

- Portrait of Kalmi, hip-hopper and his almost acrobatic performances.

- Achille and Pâris, enfants de cirque, who posed together and, though still very young, work as professionals at the Cirque Phocéen (circus).

- Alice et les vaches blanches (Alice and the White Cows), which, at moments, given the calm of the cows, offers viewers – more than the other portraits with video panels – a mediation on our understanding of movement.

There are other triptych portraits, this time wholly photographic ones, whether in colour or black and white. For these, Varda has conceived metal frames vaguely inspired by the work of Mexican artisans, including the hinges. The photographs in the side panels of each triptych are related to the person in the photograph: La jeune fille à la tourterelle (Young Girl with Turtle Dove, 1950)/ Miquel Barceló (2011)/ Rosalie, fille d’Agnès (Rosalie, Agnès’s Daughter , 2013).

Agnès Varda suggests two other approaches to the triptych:

– An installation of three objects in homage to Lautréamont.

We know that Agnès Varda has already worked on the theme of vision in three images in the Triptyque de Noirmoutier ( 2004), shown at the Fondation Cartier pour l’Art Contemporain, which has acquired the work, as has MOMA.

Visitors to the gallery are also greeted by a fragmented composition, but this time in the form of a jigsaw puzzle assembled and exhibited. Five holidaymaking school leavers who had just taken their baccalauréat posed for Agnès on her favourite beach in Noirmoutier.

As the exception that confirms the rule of three, Agnès Varda is exhibiting seven images taken from one of the sequences of her film Sans toit ni loi (Vagabond, 1985), thereby continuing her reflection on photography and video and their relation to time and movement. Played by Sandrine Bonnaire, Mona is attacked by the grotesquely disguised Paillasses, who cover her with wine lees as part of a folk ritual.

Immobilising these filmed moments, the subject, meaning and rhythm of the film disappear, their place being taken by a series of abstract images, the traces of movements.

“A title that rhymes, with a wandering Y.

A project connected with old paintings and my taste for

portraits with video side panels, frames in 3 panels...

but not three little piggies.

For the atypical ones, we’ll see.

to reconstitute an image; it’s a game that becomes static:

baccalauréat students who posed on posts like resting seagulls.

We capture the cessation of movement, or a 24th of a second.

media at my disposal: photography, cinema and video.

Metal and cardboard, everything can be made into a proposition.”

In 1954 she set up the production company Ciné-Tamaris to make her first feature film, La Pointe courte, thanks to which she is known as the “Grandmother of the Nouvelle Vague.”

The best known of the 33 fictions and documentaries both long and short made by Agnès include Cléo from 5 to 7 (1961), Vagabond (Golden Lion at the Venice Film Festival, 1985), Jacquot de Nantes (1991), The Gleaners and I (2000) and The Beaches of Agnès (César for Best Documentary, 2008). In 2011 the series Agnès de-ci de-là Varda, was shown on Arte then published on DVD. It features her travels and meetings with artists. 2012: release of all Varda’s films on DVD in a box set TOUT(e) VARDA co-published by Arte and Ciné-Tamaris.

President of the Caméra d’Or jury at the Cannes Film Festival in 2013.

In 2003 Agnès started her career as a “visual artist” (an expression she prefers to the French plasticienne), makinginstallations, videos and photographs.

January–February 2013, recent photographs and new video under the title LES BOUCHES DU RHÔNE, at the Galerie d’Art du Conseil Général in Aix-en-Provence, as part of Marseille-Provence 2013.