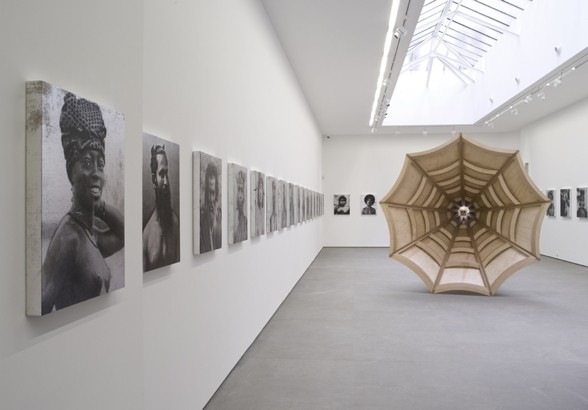 Brook Andrew’s own mixed cultural background from Aboriginal and Celtic parents, growing up in Australia, has led him on a journey to uncover the often invisible legacies of colonial societies. His travels to international museums and collections like the Royal Anthropological Institute in London has afforded him a wealth of material to inspire works such as his lauded Gun-Metal Grey series. His own rare book and postcard collections inform much of his archival and research practice seen in works like 52 Portraits and Anatomy of a Body Record: Beyond Tasmania.

The inspiration for the exhibition concept was a rare 1909 book (1) by Australian anatomist Richard Berry. The book documented fifty-two Tasmanian Aboriginal skulls in private and public collections; all held as token trophies to the so-called ‘dying races’ of Tasmania. Reflecting on Berry’s drawings and the racial judgment theories of that time, the artist has created fifty-two beautiful and enigmatic religious-style paintings of ‘saints’ from disparate parts of the world who have in turn been exoticized. The portraits glow silver and serve as intense reminders of the subjects existence usually only remembered through nineteenth century carte de visite for tourists, but now highly collected as historical archival documents. The artist actively re-inserts back into contemporary history the people that were often desired and scrutinized without names or equality.

Writing about the complex histories addressed by Andrew’s artwork, Professor Ian Anderson (2) explains: ‘... his view is global... I too see the resonances of a global cultural process that re-ordered much of humanity through the perspective of colonizing peoples. (3) ’ Andrew argues that the effects of these past practices still haunt indigenous people today and that these historical practices continue to resonate in the ways in which dominant societies of the world still view and have opinions on people from these societies.

Inevitably, the people from these societies often continue to be seen as ‘relics’ of a past society, primitive and uncivilized, unworthy of equal judgment and respect. Within this outdated view of these cultures, the people are often inflicted with labels of ‘victim’ and ridiculous cultural expectations of an authenticity bound by the times in which they were first ‘discovered’ by the explorers and conquerors of the 19th Century. As a result, Brook Andrew’s challenge is to raise these peoples from a silent erasure to one that is heralded by savior status as ‘saints’. The result is to free the unknown subjects and their cultures from the archaic view as primitive to one that reflects these true cultures with intelligence of religion, science and complex social structures. Andrew himself at times under the anthropological gaze of authenticity and at times not seen as ‘Aboriginal enough’, often debates the issues that people of mixed blood have always inherited their cultures and do not demise into nothingness once their ancestral cultural objects and bodies have been acquired or stolen for European or other collections and experiments.

The sculpture Anatomy of a Body Record: Beyond Tasmania is a wunderkammer. Within it lays a real human skeleton used for medical purposes, alongside rare books and other objects and materials relating to the legacy of colonization and firmly placed within an art, scientific and imaginative space. Anthropomorphic in nature and animist in spirit, the sculpture’s body encases juxtaposed objects to create an intense theatrical drama contained within its coffin like structure. The immense gramophone amplifies the skull’s breath or escaping long-dead voice, as well as acting as a communication device between the dead and the living. This drama mixes the past with the present to contaminate our memories. The glass body of this animal has a tail or intestine like structure that exits via the sculptures ‘anus’, possibly whereby the inner object’s spirits are excreted. The gramophone as mouth, glass cabinet as body and coffin and the tail as excrement all nod to the machine of colonialism: consumption, collection, documentation and relic of exoticized or so-called primitive cultures. This wunderkammer is animal and machine; it is witness to those silver saints that return their gaze from the histories and museum collections acquired from lands far away.

The saintly faces surrounding the room ‘...takes us to another intersection where politics and aesthetics run in and over each other’ writes Professor Nikos Papastergiadis (4) in his essay Counterpoints and Harmonics (2013). Papastergiadis continues to address this past obsession of dominant Western cultures and its contemporary implications: ‘This absurd extension of science and mytho-poesis ... conducted by some of the most eminent anthropologists and biologists and it shaped public opinion... The modern scientists that examined the bodies of Aboriginal people were not only inspired by this classical obsession with faciality, which was also sustained by the theological fascination with the face of Christ, but then added the full armour of empirical science to demonstrate the veracity of these beliefs.’ Inevitably, Andrew’s aim is for these unknown faces of scientific study be re-defined and immortalized as Saints or classical portraits that covet our attention and firmly challenge the visual time-line of humanity.

Considering the powerful messages written within this work, Brook Andrew decided that a musical requiem was needed to celebrate the lives of these unkown people and legacy of such scientific and collection practices. He commissioned Rwandan/British composer Stéphanie Kabanyana Kanyandekwe. The final composition Illusions on Self Motion “...is a hauntingly beautiful requiem that pays homage to the spirits of the deceased, while at the same time gives them a voice that transcends time and space. (5) »

Born in 1970, Sydney, Australia. Lives and works in Melbourne.

Brook Andrew studied at COFA, University of NSW, Sydney (MFA, 1999). He has become one of the most important artists of his generation in Australia and the Asia-Pacific region. He boasts an extensive presence in important public and private collections, notably at the National museum of Contemporary Art of Seoul (South Korea), National Gallery of Australia (Canberra, Australia), Art Gallery of New South Wales, Museum of Contemporary Art, Australia (Sydney, Australia), Gallery of Modern Art (Brisbane, Australia) and the Vizard Foundation Collection and the Gordon darling Foundation (melbourne). Represented by Nathalie Obadia Gallery in Paris and Brussels since 2013, this is his first exhibition in a European gallery.

Brook Andrew’s recent projects include his first curatorial work TABOO at the Museum of Contemporary Art, Sydney, in which he also included a vitrine installation of his personal archival collections. His research into private and museum collections currently informs a new museum intervention on exhibition in Vivid Memories at the Musée d’Aquitaine, Bordeaux. He will soon begin work on a new site-specific installation for the exhibition ‘Really Useful Knowledge’ curated by the Zagreb based curatorial team WHW at the Museo Nacional Centro de Arte Reina Sofía in October 2014.
www.galerie-obadia.com