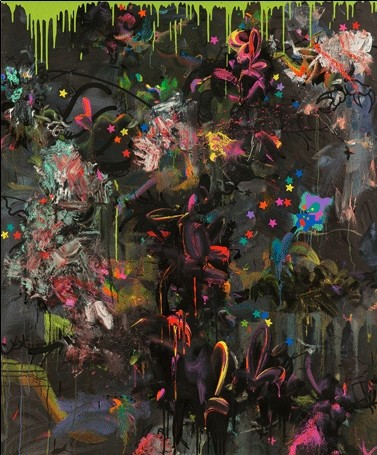 Galerie Nathalie Obadia is pleased to announce its exhibition of new works by Fiona Rae, As I run and run, happiness comes closer. This is the artist’s fourth solo show at the gallery (after 1994, 2000 and 2004).

In France, she also had a major retrospective at Carré d'Art in Nîmes in 2002.

Born in 1963 in Hong Kong, British painter Fiona Rae is one of the most important artists of her generation. After graduating from Goldsmiths College, London, she was associated with the group labelled the “YBAs” (Young British Artists), alongside Damien Hirst, Gary Hume and Sarah Lucas. Since the early 1990s she has been developing a complex, powerful and highly individual body of work which has been shown in numerous exhibitions around the world and is held in such prestigious collections as the Tate Gallery, the Mudam in Luxembourg, Carré d'Art, the Fonds National d'Art Contemporain in Paris and the Fundacio Caixa in Barcelona.

“Fiona Rae has managed to set aside all prior knowledge of conventions regarding forms and manner in painting in order to import all kinds of motifs onto the surface of the canvas and let them deploy there,” wrote Morgan Falconer in his text for the catalogue of "Swag," Rae’s show at the gallery in 2004.

Fiona Rae also brings out more biographical aspects such as memories of travel or of her readings and encounters. Born in Asia and educated in Great Britain, Rae is a globetrotter in the world that is her painting, where Western and Eastern cultures (travels to Japan) combine in subtly combined colourful compositions of forms.

Philip Guston, Jackson Pollock and Cy Twombly are among her references along with younger artists such as Takashi Murakami, Peter Halley, Jonathan Lasker, Beatriz Milhazes and Jessica Stockholder. What we get are highly original and vigorously rhythmic Pop-Abstract constructions in series such as “Hong Kong Garden” and “Swag,” which are like chapters in a book of adventures. Mastery and freedom are at the heart of Rae’s encyclopaedic painting.

In the catalogue for this new exhibition, Nicolas Bourriaud writes of Fiona Rae’s “atlas”; her “ “trajectory-forms”... [which] constitute an atlas of the mutation of the spaces in which we move: emblems, signs, blinking neons, dirty walls, signage and messages.” He points out that Fiona Rae is engaging in a surprising and original way with what is the main issue for contemporary painting, namely the canvas as a “ layered, nomadic space...the GPS [Global Positioning Satellite] of our presence in the world”.
www.galerie-obadia.com