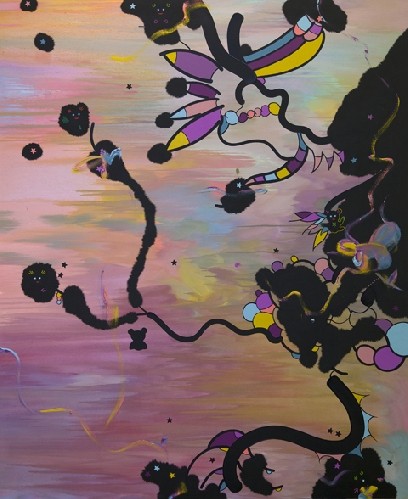 Nathalie Obadia Gallery is delighted to present New Paintings by Fiona Rae, marking both twenty years of activity at the gallery and the inauguration of a second Parisian space in the Marais. This is Fiona Rae’s fifth exhibition with Nathalie Obadia: the first held in 1994, was followed by shows in 2000, 2004 and 2009.

For going on 25 years, this British painter has been developing a body of work that is remarkable for its power, for the intensity with which it bestows physical presence on the virtual sign language that forms our everyday environment. In the set of works being shown for the first time, made between 2011 and 2013, Fiona Rae presents dynamic “screens” whose theatre of activity stimulates the viewer’s mental projections. This organised chaos offers us a profusion of visual choices, generating fantastic worlds, stimulating complex desires, playing on our bustling preoccupations and anxieties.

While never denying the influence of gesturality from Abstract Expressionism, or the echo effect of Pop Art imagery, Rae manages to create a painterly vocabulary that pays tribute to art history while being resolutely innovative. Positioning her work in relation to the great tradition of American abstraction – to painters like Franz Kline, Philip Guston and Frank Stella, she combines their world with the neo-Pop inflections of people like Beatriz Milhazes, Franz Ackermann and Takashi Murakami. The artist composes her paintings as a kind of palimpsest which constructs and deconstructs painting while keeping a record of the successive gestures, producing an image whose apparent tangle of formal terms is meaningful. In her paintings, the artist oscillates between an initial, planned and controlled arrangement – based, for example, on the constraints of her palette – and the abundant leeway left for improvisation that is luxuriant and impulsive, almost performative.

By probing the possibilities of painting, each work refers the viewer to the cartographic space of a mental and physical utopia. The mashing and melding of successive levels, the melee of hybrid forms and signs that impose leaps in scale, figurative motifs like structuring islands to which we adjust our gaze and which fix the space, the conjunction of abstract components, micro-narratives and biomorphic forms, and dotted and lash-like lines imaging the spontaneous fluxes we imagine to be decisive for the work’s substance, all form a pictorial archipelago whose raison d’être lies, indeed, in the equilibrium they generate.

“These new paintings were kicked off when I bought a string of Chinese embroidered pandas from the Pearl River emporium in New York. The handmade stitching looks like colourful drawing on the black and white silk. The wobbliness of their facture gives them ambiguous expressions and status, so that they appear both ludicrous and ominous at the same time. Even more importantly, I could use them as a reason to make a painting. Sometimes it’s hard to justify the act of painting; its expressive and gestural marks can seem unwarranted and unconnected to anything much in the so-called real world, and even worse, the nightmare of painting’s history haunts the studio. With these pandas as mascots, amulets, protagonists, victims, observers, or whatever their role in each painting might be, I can make a painting that has an angle or an eye on itself, while simultaneously being a full-blooded, full-on manifestation of painterly possibility.
I’ve always been intrigued by what it’s possible to include in a painting; I have an iconoclastic approach to subject matter and formal concerns. If I’m told that you’re not supposed to disrupt the picture plane, then I very much wish to do so immediately. Hence alongside what one might identify as high modernist painterliness, I use graphic signs, symbols, recognizable images and cartoons, spray paint, glitter, whatever seems like a good idea at the time. It’s not that I want to question in a self-conscious way the act of painting, it’s just that I cannot pretend to the idealistic purity of a modernist artist. However I think it’s vital to forge ahead with all the energy and positivity and self-belief that one can muster.
Context and contingency are all: in these paintings the disparate elements are held in a suspension of disbelief. For the moment, a star shape is decorative and not decorative. A dotted line is informative and not informative. It all hangs together for a moment, and like a cartoon cell, everything might change in the next instant. The titles function in much the same way as the paintings; they are sad and funny bouquets of words that often don’t quite make sense in a literal way, but do communicate an intention. I think the beauty and excitement of painting is its potential to present a world for the viewer to inhabit, without instructions as to how to negotiate and understand it.”

Fiona Rae studied in London at Croydon College of Art (1984) and Goldsmiths College (1987). At Goldsmiths, alongside Damien Hirst, Gary Hume and Sarah Lucas, she was part of the group known as “Young British Artists,” whose arrival rejuvenated the British art scene in the 1980s and 90s. Rae became one of the leading abstract painters of her generation, her work prominent in such prestigious public and private collections as Tate Modern (London), the Fond National d’Art Contemporain (Paris), Mudam (Luxembourg), the Fundacio Caixa (Barcelona) le Carré d’Art - Musée d’Art Contemporain de Nîmes (Nîmes), the Corcoran Gallery of Art (Washington DC) and Astrup Fearnley Museum (Oslo). The Carré d’Art – Musée d’Art Contemporain in Nîmes mounted her first major solo show in 2002, to great public and critical acclaim.
The exhibition Maybe you can live on the moon in the next century will be presented at the Towner, Eastbourne (UK) from 27 April to 23 June 2013, following earlier showings at Leeds Art Gallery and The New Art Gallery in Walsall in 2012. Also in the UK, her work will be in the spotlight in Spring 2014 on the occasion of a two person show with Dan Perfect at Nottingham Castle Museum and Art Gallery, and during Summer 2014 at Southampton City Art Gallery.
www.galerie-obadia.com