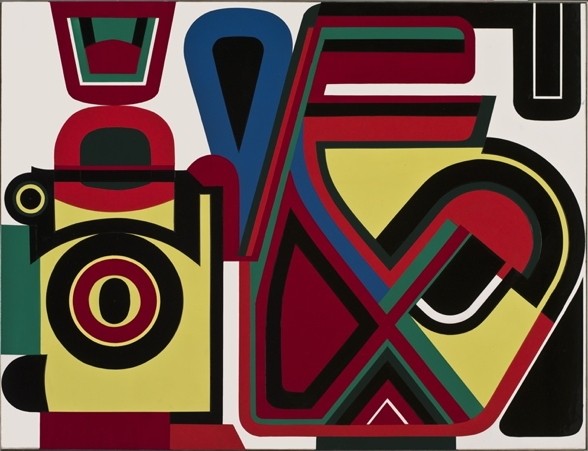 Galerie Nathalie Obadia is very pleased to present ANTISCULPTURES by Jean Dewasne. When the gallery opened at 18 Rue du Bourg-Tibourg in Paris in February 2013, it wanted to pay tribute to this important French artist of the twentieth century whose atelier occupied this same space for almost 20 years until the artist’s death in 1999. To mark the occasion, a selection of Antisculptures never exhibited in a gallery will be shown for the first time to the public.

Born in Lille in 1921, Jean Dewasne quickly embarked on abstraction and was a member of the founding committee of the Salon des Réalités Nouvelles in 1946, the year in which he was the first winner, with Jean Deyrolle, of the Prix Kandinsky. He resigned from the Salon in 1949 and dedicated himself to the development of avant-garde art through the foundation of the Atelier d’Art Abstrait with Edgard Pillet in Montparnasse in 1950. This educational establishment was to polarise artists and intellectuals in the early post-war period but quickly won itself international attention. Dewasne’s first retrospective exhibition was held at the Kunsthalle in Berne in 1966. His production earned recognition in France and was included in the French pavilion at the 1968 Venice Biennale with that of Arman, Piotr Kowalski and Nicolas Schoffer. In 1972 his work was represented at the famous exhibition Douze ans d’Art Contemporain en France and he elaborated the blue with which the Centre Pompidou was painted (he would later refer to the building as his greatest Antisculpture). In 1991 he was elected a member of the Académie des Beaux-Arts, taking the seat of Hans Hartung.

Attracted by the methods and media of industrial production, Jean Dewasne incorporated into his practice its characteristics of extreme precision and thoroughness, which he would always combine with theoretical commitment and a procedure of conscious reflection. He left many writings that demonstrate his lively interest in philosophy and mathematics (particularly for topological spaces) over and above his early training in the fields of architecture, fine arts and music.

The term Antisculptures refers to Jean Dewasne’s works that combine the practices of painting and sculpture, which he developed through the application of flat tints on pieces of coachwork from car or lorry bodies, hard-wearing supports in the extreme. Aesthetic topics that characterise his œuvre were the technical and industrial nature of paint and its supports (glycerophtalic paint, Ripolin, lacquer, cold enamel, Isorel, metal surfaces), the arrangement of pre-defined coloured spaces to discover the permutation in which the colour would achieve its greatest intensity, the early use of spray-painting, the non-flatness of the industrial bodywork that he took to pieces, and the finding of new purposes for objects. The Galerie Nathalie Obadia presents four Tableaux, three Antisculptures (Cerveaux-mâles), and two Ronde-Bosses (mural Antisculptures, also called Capots). Today there are eleven Antisculptures by Jean Dewasne in French public collections.

Induced by his interest in the world of industry, Jean Dewasne also experimented with the production of very large format works, injecting colour into urban environments with commissions in France and abroad (e.g., the Murales in the Grande Arche in La Défense, which cover almost 15,000 square metres, two mural works 110 metres long for the metro system in Hanover, and four mural works 10 metres long for Renault). With these strongly architectural works, Dewasne helped to redefine the relevance of art to the public urban space.

On his death, his work and archives were generously donated to the Musées de France, and were divided up between many public institutions (Centre Pompidou, Musée d’Art Moderne de la Ville de Paris, MAC/VAL), and notably in the museums in the north of the country where he grew up (Musée Matisse – Le Cateau-Cambrésis, Musée des Beaux-Arts de Cambrai, the LAAC in Dunkirk). A worthy representative of one of the major currents of the twentieth century, geometric abstraction, Jean Dewasne offers a work that contributed to the development of what was then a new art, whose powerful modernity combined with the contemporaneity of his practice is still eloquent today.

Jean Dewasne attracts increasing attention from art historians, critics, curators, artists and collectors and his work has recently been rediscovered by public institutions. His widow, Mythia Dewasne, was nominated Officier des Arts et des Lettres in May 2013 at a ceremony at the Centre Pompidou for her contribution to the enrichment of France’s national collections. An exhibition will be dedicated to the artist during the first half of 2014 at the Musée de Cambrai, followed by an exhibition titled 1921–1999 at the Musée Matisse – Le Cateau-Cambrésis from 22 March to 9 June 2014.
www.galerie-obadia.com