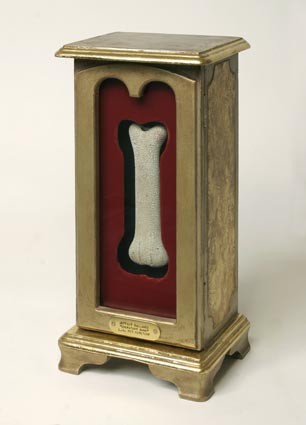 Galerie Nathalie Obadia is delighted to announce the first French exhibition by Jeffrey Vallance. Born in 1955 in Torrance, California, where he lives and works, he is a graduate of California State University, Northridge (1979) and Otis Art Institute of Design, Los Angeles (MFA 1981).
His work Blinky, the Funky Hen (1978) was a much talked-about feature of the Los Angeles 1955-85 exhibition at the Musée Musée National d’Art Moderne (Centre Georges Pompidou) in 2005.
Jeffrey Vallance has chosen to exhibit for the first time a selection from his series of 80 Reliquaries, about which a publication is due later this year.
Throughout his work, Vallance uses objects that have structured his own life. These are an integral part of his artistic process.
Since the mid-1970s he has been exploring miraculous and paranormal events in which the religious, the secular and the political come together in surprising ways. In addition to paintings, drawings, handwritten letters, sculptures and relics, his activity also extends to a regular column on supernatural events in LA Weekly Magazine.
A conceptual artist who explores the links between art and life, since the 1970s Vallance has also produced performances and curated shows, notably with the catalogue Preserving America’s Cultural Heritage, Californian College of Art, 2006.
With his working class, small-town roots, he has a special feel for the way American mythology articulates the religious and iconic figures such as Nixon and Elvis Presley.
In contrast to the rather subversive and pessimistic visions of Paul McCarthy and Mike Kelley, Vallance offers a more poetic vision of contemporary America which is based both on the great founding myths of humanity and his own daily life, which blends effortlessly into the events of World History.
In this new series, the Reliquaries are constituted by seemingly insignificant objects (bones, medals, etc.), which are nevertheless freighted with memories, both historical and personal, everyday, popular. Vallance has always been fascinated by the power that celebrities could confer on an ordinary object. Whether religious relics (blessed by Pope John Paul II, taken from his childhood Lutheran catechism), political myths (dried flowers from Richard Nixon’s funeral, or objects from the palace of the King of Tonga) or everyday objects from the lives of stars (bits of carpet from Presley’s home Graceland), Vallance changes the perception of objects through the power of his own interest in them, which makes them contemporary relics.
“More than anything else, this is a collection of personal objects that represent my life, my work, which are inseparable. I consider most of my activities as artistic, which is way a lot of the objects are relics of ‘performances,’ like having an audience with Pope John Paul II, or with the King of Tonga,” explains Vallance, who knows that he is a vector for memories that are both universal and specific to his own cultural background, deeply rooted in postwar America.
www.galerie-obadia.com