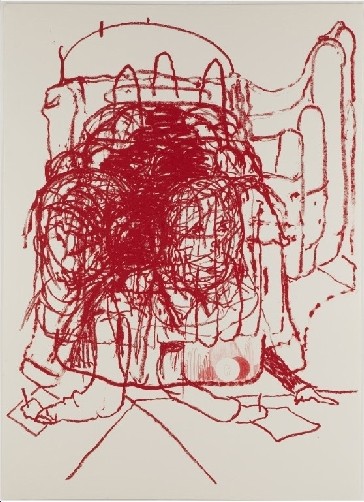 Galerie Nathalie Obadia is pleased to host a new exhibition by the Berlin-based Portuguese artist by Jorge Queiroz, his third at the gallery.

His large-format works on paper received much attention in the Clandestine exhibition at the 2003 Venice Biennale (curated by Francesco Bonami). In 2004 at the São Paulo biennial he exhibited a set of large-format drawings originally seen at his first show at the gallery earlier that year. He had a retrospective at the Museu Serralves in Porto, Portugal, in 2007.


For this exhibition, Jorge Queiroz is presenting a new ensemble of large-format drawings in relation with a series of small-format works.
In them, Queiroz explores the whole range of drawing media: pencil, charcoal, crayon, gouache and Japanese ink, creating a network of spaces occupied by the juxtaposition of the familiar and the indefinable, the narrative and the abstract that gives his works their magic.
The indeterminate spaces of his fictive and psychological worlds teem with hybrid bodies and objects, as if his eye was the chief witness of an agitated scene acted out by mysterious figures coming together in a disconcerting conflation of perspectives.
Queiroz says of his drawings that “they have the structure of narrative, but a structure that remains unknown, as if it were a construction whose production is the fruit of an enigma, of looming and fading forms and figures.”
Queiroz’s drawings are impossible to describe, but can only be expressed in their own language, in which the imaginary dimension described by Lacan is what dominates (the basis of our individual languages). If the artist’s pictorial vocabulary has a code, this code is always shaken up by a mosaic of places, constructions and characters that render the image mysterious.

These extraordinary drawings have something in common with the Surrealist spirit found in the works of Georges Bataille, Alfred Kubin, Thierry de Cordier, Dennis Potter and James Joyce.
www.galerie-obadia.com