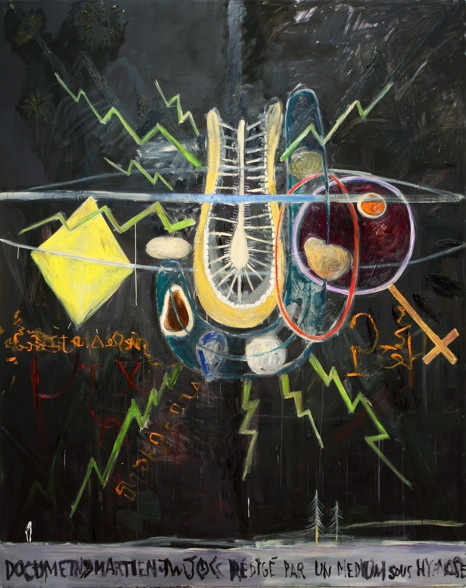 Galerie Nathalie Obadia is pleased to present Notes from the St Anne Asylum as its fifth collaboration with the artist Manuel Ocampo.

Notes from the St Anne Asylum presents a selection of paintings executed during the Filipino artist’s stay in Montpellier in 2013. Invited by the Carré Sainte-Anne to occupy this deconsecrated Neo-Gothic Catholic church, Manuel Ocampo organized an exhibition of 35 works, of which 23 paintings date from 2009, together with 12 works inspired by the place itself that he produced during the three months prior to the exhibition.

Manuel Ocampo’s paintings have the remarkable ability to communicate the artist’s subtle observation through a profusion of semiotic signs abounding in meanings and references. On a single plane, he harmonizes signs from the Judaeo-Christian religion, vernacular imagery, the conquistadors and the iconography of Spanish Catholicism, the underground culture of Manila, trash comics, Robert Crumb’s cartoon imagery and science fiction, art naïf and the violence of Mexican ex votos plaques, the glorification of the burlesque and aesthetic of gore films, heavy metal culture, the craftsmanship of South American retablos, a satirical view of history and morality allied with political cynicism, Neo-Dadaism after Duchamp and the surrealism of Picabia, and above all the popular ideal of the figure of the rebellious artist who denounces the hypocrisy of the attainments of our contemptible civilizations.

A creator of subversive, degenerate images, Ocampo takes pleasure in raising the chaos in his compositions to an extreme degree. By placing religious fetishes and symbols of our values alongside icons of popular culture, Manuel Ocampo questions our attachment to these values transposed to our unstable and uncertain consumer society.

The title of the exhibition, Notes from the St Anne Asylum, directly referring to the Carré Sainte Anne in Montpellier - the place the paintings were created for, also references a place where one is protected from persecution, pursuit and justice, in short a sanctuary: “It’s generally thought that artists place a distance between themselves and the conventions of daily life, and that they cultivate a certain craziness, whether real or imaginary, which is how they are expected to behave – a cliché that is broadly exploited by artists”, he comments.

Despite the excessive nature of Manuel Ocampo’s work, it offers viewers a degree of conviction: it is precisely because he so rudely displays his anarchic images before us that we may take some comfort that established values might be called into question, and we can hope that it is through decadence and destruction that resurrection will be achieved.

Manuel Ocampo was born in Quezon City, Philippines, in 1965.
He lives and works in Manila, the capital of the Philippines.

After attending the University of the Philippines, he moved to Los Angeles where he studied at the California State University in Bakersfield, graduating in 1985. He remained for some ten years in California, where his first solo exhibition, in 1988, opened the path to a solid international career. His work was presented in particular at the two leading events on the European contemporary art scene that helped to establish his renown – Documenta IX in 1992 (curated by Jan Hoet) and the 1993 Venice Biennale.
Since the early 1990s, his work has been shown in important museum exhibitions, such as Individual Realities in the California Art Scene at the Sezon Museum of Modern Art in Tokyo (1991), Helter Skelter: L.A Art in the 1990s at the Museum of Contemporary Art in Los Angeles (1992), and Jean-Michel Basquiat & Manuel Ocampo at the Henry Art Gallery in Seattle (1994). He has also participated in many biennials, including those in Gwangju (1997), Lyon (2000), Berlin (2001), Venice (1993, 2001) and Seville (2004), as well as at the 7th Asia-Pacific Triennial of Contemporary Art in Australia (2012).
In 2005 he was given a retrospective at the Casa Asia in Barcelona, then at Les Maîtres du Désordre at the Kunst-und Ausstellungshalle der Bundesrepublik in Bonn in 2012, and in 2013 at Copenhagen’s Space of Drawing, with The Corrections.

In 2013, his exhibition at the Carré Sainte-Anne in Montpellier was met with great critical and public success, and he also curated the exhibition Manila Vice at the MIAM (Musée International des Arts Modestes) in Sète, where he presented the dynamic contemporary scene emerging in the Philippines. His work is currently represented in Divine Comedy at the MMK Museum für Modern Kunst in Frankfurt (till 6 July 2014), and at Possession II at the Coventry School of Art and Design in the United Kingdom (till 13 April 2014).
Manuel Ocampo’s work is included among important private and public collections, such as the Museum of Contemporary Art in Los Angeles, the Whitney Museum of American Art in New York, the Museo Nacional de Arte Reina Sofia in Madrid, the Musée d’Art Moderne Grand-Duc Jean (MUDAM) in Luxembourg, IVAM in Valencia, the Fukuoka Asian Art Museum in Japan, the Fond National d’Art Contemporain in Paris, FRAC Languedoc-Roussillon, FRAC Ile de France, and the Museu Colecçao Berardo in Lisbon.
www.galerie-obadia.com