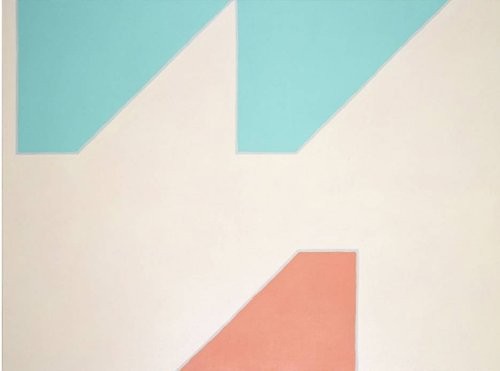 Galerie Nathalie Obadia is honoured to exhibit an ensemble of ten works by Martin Barré painted and exhibited in 1991. Originally shown in the same year at the first Biennale d’Art Contemporain in Lyon, this is the first time this ensemble has been shown in its entirety since then.

A leading proponent of abstract painting, Martin Barré probed the fundamental parameters of the medium: format, gesture, series, hanging, etc. In his work, line and form are elements of a syntax for ordering a potential structure within the space of the picture object and of its surroundings.
“I do not paint to convey moods,” said Barré, modestly. “I use a rule, a rule of the game. I transgress it when the painting requires me to do so.”

The ten paintings from 1991 presented at the gallery belong to a series built around the internal relations between colour, border and space. In 1972 Martin Barré began to work in series, each one based on a specific vocabulary of iterated and subtly subverted geometrical figures and an always limited range of colours. The role of colour gained in precision towards the end of the 1970s, with increasingly prominent contrasts and coloured areas. In the “91”’ series the chromatic unity is gentler, the colouring of the space more sustained – “sand-coloured,” the artist called it. A grey line painted freehand with a brush appears around the coloured forms. The artist gives up the square for a horizontal format, described by Yve-Alain Bois as the “predella format.” Barré now hung the works in a frieze layout, marking out the exhibition space.

Martin Barré was born in Nantes in 1924. At his death in 1993 he left a body of work whose diversity and intelligence ensure it an eminent position in the history of art of the second half of the twentieth century. Exerting a growing influence on young generations of painters, his work is to be found in many public and private collections and has featured in a number of major exhibitions, notably at the ARC/Musée d’Art Moderne de la Ville de Paris in 1979, the Musées des Beaux-Arts in Nantes and Tourcoing, the Galerie des Ponchettes and the Galerie d’Art Contemporain, Nice, in 1989, and the Galerie Nationale du Jeu de Paume in 1993.
The exhibition put on at Galerie Nathalie Obadia in 2006, “Idées de la peinture, Hommage à Martin Barré,” reaffirmed the importance of this most unusual artist, and his relevance to other practices. Barré’s work was shown in juxtaposition with works by Christian Bonnefoi, Raoul de Keyser, On Kawara, Peter Halley, Robert Mangold, Albert Oehlen, Bernard Piffaretti, Pascal Pinaud, and Christopher Wool.
Exhibitions put on at Galerie Daniel Buchholz in Cologne in 2007, Andrew Kreps, New York, in 2008, and Esther Schipper, Berlin, in 2010, further extended interest in Barré’s work from collectors, curators and artists. In 2008 a major monograph was published by Galerie Nathalie Obadia, Thea Westreich and Ethan Wagner jointly with Galerie Daniel Buchholz and Andrew Kreps. It accompanied the English translation of Yve-Alain Bois’s text, Martin Barré, originally published in 1993 in the “La Création contemporaine” collection by the Centre National des Arts Plastiques and Flammarion.

More recently, three works were purchased by the Städel Museum, Frankfurt, in 2009, and in 2008 the MNAM Centre Pompidou organised a hanging that set up a dialogue between Barré’s works and those of Robert Ryman, Agnes Martin and Carl André. Also that year the artist Wade Guyton included a Barré painting in the exhibition “Oranges and Sardines – Conversations on Abstract Painting” at the Hammer Museum, Los Angeles.
www.galerie-obadia.com