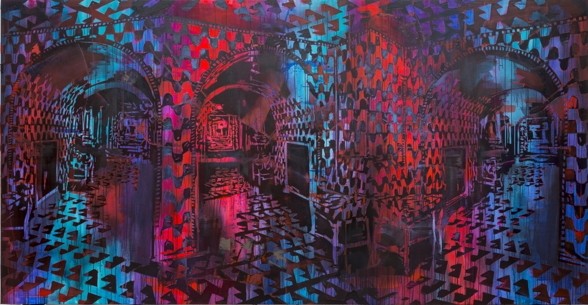 Galerie Nathalie Obadia is very pleased to present RECONSTRUCTION by Rosson Crow, her third collaboration with the gallery, following With Love, From Texas in 2005, and Paris, Texas in 2010. Born in Dallas in 1982, this American artist holds a master’s degree in the Fine Arts from Yale University (2006) and a graduate degree from the School of the Visual Arts in New York (2004).

In RECONSTRUCTION, Rosson Crow has embarked on painting the complex history of the southern United States, where she hails from. With its Protestant evangelical traditions, its colonial past, the ancient institution of slavery, and its separatism during the Civil War, the American South has a highly collective identity that Rosson Crow assimilates into her painting, and which attests to its response to the American Dream through violence. The representations of the magnificent homes of plantation owners, funerals scenes - To Lay a Ghost, 1963, 2013, A Spectral Jest, 2013 and 16th Street Baptist Church, Birmingham, Alabama of 2013 (this is the Afro-American Baptist church where four young girls were killed in a dynamite bomb attack by the Ku Klux Klan in 1963 in a reaction to the weakening of the foundations of racial segregation, then in force) focus attention on the violent episodes that have punctuated the history of the South, where the culture and heritage are at odds with the states in the rest of the country.

Ms. Crow takes oil painting to a higher level with her use of adhesive tapes, which she has already used in previous works to create dynamic blank areas and structuring filled areas. The resulting fragmentation interrupts the construction of the images and corresponds to the fractured history of the southern states to which she alludes.

In another approach that she takes to the limit, Rosson Crow presents deserted places whose spatiality tends towards psychedelic and hallucinatory abstraction. Employing a palette of corrosive colours and extreme framing (frontal, panoramic, vertical) that demonstrate her formal skills, she sets her images at the point at which abstraction verges into figuration and figuration becomes abstract.

Taking the psychological aspect of these spaces as her starting point, and the way in which the viewer experiences them, the artist endeavours to retranscribe the atmosphere “of an American version of Versailles through its fabricated luxury” in places haunted by history, the vestiges (or stigmata) of a certain history of the American South. The emphasis she places on ornamentation, the organisation of artificial and anachronistic decors, and architecturally superficial interiors contributes to substantiate her attitudes to the construction of the facts of History through its spatial dimension. In her dehumanised scenes, the Neoclassical arrangement of the pleated drapes of the paegentry salons, the crossed ogives of the Baptist Church, and the Baroque majesty of the rooms in the Beehive House are like architectural motifs of the decline and crumbling of the American Dream.

With an unusual knowledge of the history of American and European art, in particular of contemporary German painting and 17th- and 18th-century French painting, Rosson Crow counters the visual effects created by reality, like Richter, without ever abandoning the freedom of Kippenberger’s physical involvement with the painting, nor eluding the splendid colourism of Neo Rauch combined with the pop dimension of the delicate shading of Tauba Auerbach. With RECONSTRUCTION, she offers the public the consummate results of her research into ground and form: her image construction is accomplished by the injection of contemporary form into naïve, traditional images of a certain slice of America, and, by showing the statutory visual semiotics of which these harrowing dramatised scenes of power consist, she encourages the viewer not to be satisfied with the images we are shown through the artificial prisms of History.

Rosson Crow studied at Yale University, New Haven (MFA, 2006) and the School of Visual Arts, New York (BFA, 2004). She is one of the rising young artists on the contemporary scene in the USA and Europe and boasts an extensive presence in important public and private collections, notably at the MUDAM – Musée d’Art Moderne Grand Duc Jean (Luxembourg), the Carré d’Art – Musée d’art contemporain (Nîmes), the Modern Art Museum (Fort Worth, Texas), and the Zabludowicz and Dakis Joannou collections.
Her first solo exhibition was held at the Modern Art Museum in Fort Worth in 2009, which was very well received by both public and critics, followed by the Contemporary Art Center in Cincinatti, Ohio, in 2010. Represented by the Galerie Nathalie Obadia in Paris and Brussels since 2005, this is her third exhibition at the gallery, after With Love, from Texas (2005) and Paris, Texas (2010).
www.galerie-obadia.com