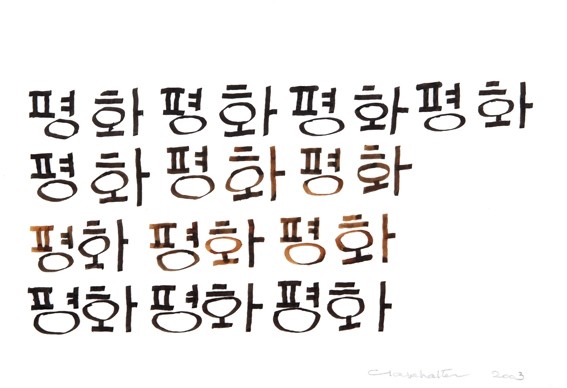 The Galerie Nathalie Obadia is delighted to be hosting the first personal exhibition by Clara Halter in Brussels.

This major show/manifesto, entitled ‘Chemins de Paix’ (‘Paths of Peace’) showcases the full variety of the artist’s work – drawings, engravings, calligraphic variations around the word ‘Peace’ bringing together the two antagonistic poles which have always driven her progress: the militant commitment to humanitarian causes and the solitary drive to explore inner space.

Continuing on from the work that was started at the millennium and the creation in collaboration with architect Jean-Michel Wilmotte of Monuments for Peace (Paris, St Petersburg, Hiroshima, Jerusalem), Clara Halter goes back to the visual method invented at that time and writes the word ‘peace’ in all of the world’s alphabets – using the graphic, regular presence of signs of a strange beauty but with a given meaning to put a word that is elsewhere hackneyed back within everyone’s reach.

However, for this exhibition, the ‘Monument’ has made way for the ‘Path’ running along all the walls on the second floor of the gallery. We have moved from the architectural dimension, which is by definition fixed, from the monumental work rising up against the passage of time, to the reflective character of a sculptural installation which invites the visitor along on a journey both spatial and spiritual. Along this initiation path which runs for twenty or so metres, the visitor discovers, in the inky signs drawn on the series of sheets of tracing paper, that every language tells the same story – the first path towards peace.

This openness to others is soon coupled with a path inwards towards the self. The search for peace among men cannot be conducted here without a quest for inner peace. It is this intimate universe, steeped in anxious but frenzied lyricism, that we can see in Clara Halter’s drawings under the magnifying glass and her solarised engravings, displayed below. As in the case of Roman Opalka, with whom Clara Halter’s work has obvious affinities, this ‘infinitesimal weaving'*of repetitive but rippling signs, calling for absolute concentration and countless hours of work, displays the ‘opaque umbilical link’ that exists between artist and work. Faced with these shapes which multiply and seem to form dancing figures which are simultaneously mobile and compact, the viewer is likewise reminded of those ‘mescaline drawings’ by Henri Michaux, whose graphic and literary output equally intensely directs his attention to the faintest movements of inner life.

Clara Halter lives and works in Paris, where she was born. From 1967 to 1977, she ran the magazine Éléments, the first international publication for Peace in the Near East, before discovering her true vocation, drawing, in 1976; her husband, Marek Halter, then a painter, published his first novel at that same time. By mutual agreement, they thereby exchange their means of expression.

Not until 1992 did she agree to exhibit her drawings for the first time, microscopic and repetitive modules worked on under a magnifying glass. Since then, she has regularly shown her work in France and elsewhere. Her works are held by several private collections and museums.

In 2000, Clara Halter turned her attention to a single word, ‘peace’, which she depicts ad infinitum, in all languages and in all alphabets, on all types of surfaces, from the infinitely tiny to the infinitely huge, from the sign to the word and from the word to its repetition all over. Such was the genesis of the Monuments for Peace, in collaboration with architect Jean-Michel Wilmotte. First of all in Paris, the Wall for Peace, on the esplanade of the Champ de Mars, facing the Eiffel Tower. Then in St Petersburg, the Tower of Peace for the city’s tercentenary in 2003. In Hiroshima, the Gates of Peace, marking the 60th anniversary of the dropping of the atom bomb in 2005. As part of a ‘French season’ in Israel in 2006, Clara Halter designed the Tents for Peace installation, and a massive canvas cover, carrying calligraphic decoration, over the Talpiot promenade in Jerusalem. The next monument that she is currently working on will stand in Jerusalem opposite the Mount of Olives and Mount Zion.