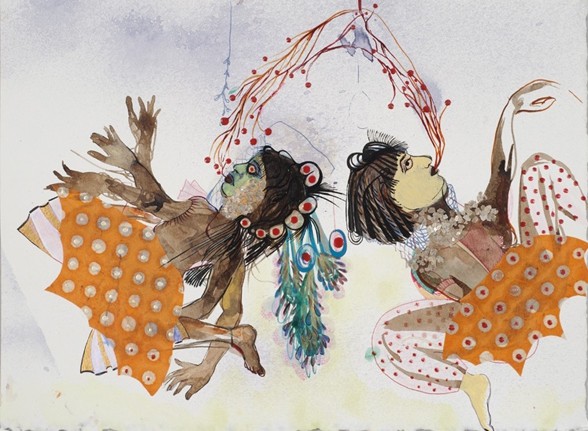 © Rina Banerjee
A collision central to our imagination, a god of one, one particle without mission clapping bones, clatter, freed red fruit for a million seasons, 2012
Mixed media on paper
28,5 x 38 cm / 11,25 x 15 in.
RINA BANERJEE
Creationism’s Kiss
7 September – 17 November 2012

The Nathalie Obadia Gallery is delighted to support Rina Banerjee on the occasion of her second exhibition in its premises in Brussels.

Born in Calcutta, India, in 1963, the American artist will show a set of drawings and small sculptures that attest to her reflection on the theory of Creationism. Widespread in the United States, and actually opposed to the theory of evolution, this religious doctrine defends the belief according to which men and women were created by God. A scientist by training, Rita Banerjee has watched with alarm the rise of this fundamentalism in decisive political stakes – education, freedom of opinion and beliefs. In line with an artistic production that denounces the globalisation of cultural perceptions and identities between East and West – locally and globally, the artist warns us here about the risk of a literal reading of the original Creation.

Through her drawings and sculptures, Rina Banerjee evokes the birth of a universe prior to which there was no particle nor molecule and no life. In imagining that there was something that was nothing if not suspect, she calls The Kiss the explosion that saved us from nothingness. Since then, man has borne the burden of his loneliness, denying death and desiring his Creator, in search of that moment which marked the beginning of infinite worlds it gave us to see.

The visual seduction of Rina Banerjee’s works on paper is a lure, an aesthetic trap that beckons the viewer not to be satisfied with what is given to see, and therefore to believe, but to interpret the hybrid nature of these figures. Grotesque and monstrous, Rina Banerjee’s silhouettes are created with a precise delineation that chisels the contours delicately by means of richly coloured ink, where the composition is airy, with traits of female figures, and what is at times an ornamental motif. As in The Temptation of Saint Anthony by Hieronymus Bosch, where hybrid half-man, half-animal creatures denounce the heretics “who resemble all those who are opposed to the righteous truth and holy doctrine, and find new opinions and inventions through which they wish to darken the law of God” (Robert Delevoy, citing Ruysbroeck, author of the Liber de Tabernaculo, 14th century), the sensuality of Rina Banerjee’s chimeric figures must not lead us to forget the metaphorical dimension.

The profile of faces in the style of Indian miniature, the personal mythology of the artist, scientific discoveries, man who travels, knowledge: Rina Banerjee’s universal referencing system in the works on show at the exhibition fuels the viewer’s eternal thinking about the ever disappointing quest of man to identify his origins.

Selected exhibitions beginning 2000 : Whitney Biennial (2001), Massachusetts Museum of Contemporary Art (2003), Brooklyn Museum Of Art (2004), The Queens Museum of Art, NY (2005), "Greater New York Show" at PS1/MOMA, NY (2005). In 2008, the Nathalie Obadia Gallery presented the artist at Art Basel 39 in Art Unlimited. In 2009 and 2010, her works were shown in succession in Site Santa Fe, New Mexico, the Musée des Abattoirs in Toulouse, and the Boghossian Foundation in Brussels. The installation She’s my country was acquired by the Musée des Abattoirs in Toulouse in 2011, and her work has been presented at the Yerba Buena Art Centre in San Francisco, at the San Jose Museum of Art in California, the Tel Aviv Art Museum in Israel, the Yokohama Biennial in Japan, and the Musée Guimet in Paris, which devoted a solo show to her in 2011 on the occasion of the exhibition Chimères de l’Inde et de l’Occident. In 2012, she participated in the exhibition India Today, in the Arken Museum, in Denmark, and will be represented at the 7th Asia-Pacific Triennial in Brisbane, Australia in 2013.
www.nathalieobadia.com