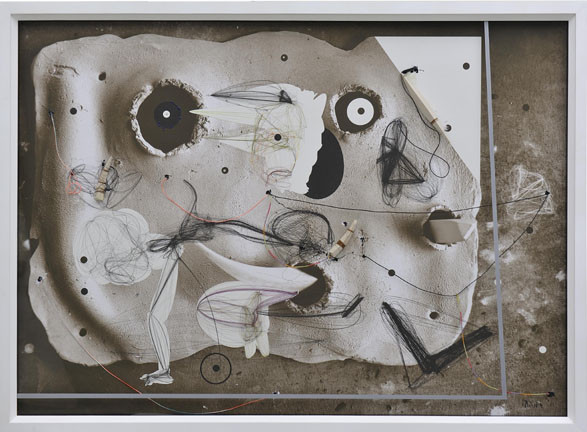 Nature Morte is proud to announce the inauguration of their new gallery space located in the prestigious Luxury Retail Arcade at The Oberoi, Gurgaon, just next to Trident, Gurgaon. On display will be a group of new works by the New Delhi-based multi-media artist Aditya Pande, given the title “Happy Birthday” to convey a spirit of celebration and excitement.

Most of Aditya Pande’s works can only be described as oxymorons: elegantly grotesque; digital primitivism; controlled spontaneity; intricately ordered anarchy. In his works, Pande balances his every movement with its opposite. The works combine the skills of drawing and printmaking with the surfaces of both photography and painting.

Aditya Pande’s unique digital, mixed-media collages excite the eye with their explosion of colors, their intricacy of lines and complex compositions. His digital graphic designs are physically altered after printing to create a surface that blurs between two dimensions and three. Pande economically creates the impression of deep recesses with sparing collage elements. One must lean in for a closer look to be certain which elements lie flat and which come off the surface.

While Pande’s technique is au courant, his subject matter and style speaks to something more primitive. While the look of the works is most immediately referential to the abstract Surrealism of the Spanish master Joan Miró and the hyper-Expressionism of the Danish painter Asger Jorn, there is something much older hiding in Pande’s pictures. Somewhere in Pande’s mixed-media creations lurks the prehistoric cave art found in both Lascaux and Bhimbetka.

Born in Lucknow in 1976, raised in Chandigarh, living in New Delhi, Aditya Pande studied at the National Institute of Design in Ahmedabad, where he received his degree in Graphic Design in 2001. He has participated in group shows at Nature Morte, New Delhi (2008 and 2010), Nature Morte Berlin (2009) and Bose Pacia, New York (2008 and 2009) as well as having solo shows at the Alexia Goethe Gallery, London in 2009 and at Chatterjee & Lal, Mumbai in 2008.
www.naturemorte.com