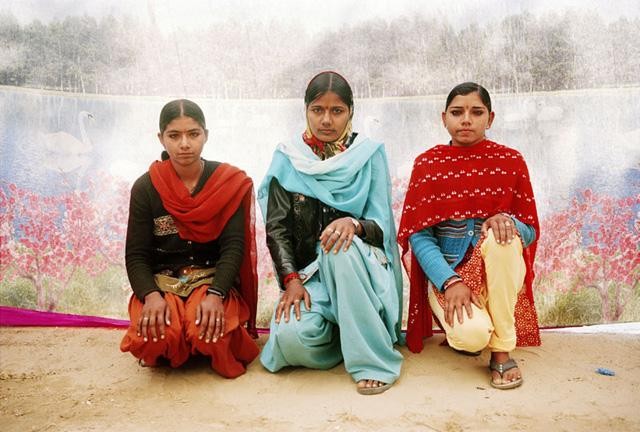 Nature Morte is pleased to launch Gauri Gill’s “Balika Mela,” published by Edition Patrick Frey of Zurich, Switzerland. With 70 black-and-white plates and 32 color reproductions, essays by Gill herself and Manju Saran (in English and Hindi), the book is a sumptuous document of Gill’s photo studio set up to take portraits of the predominantly female children and adolescents that attended the fair in remote and rural western Rajasthan. In 2003 and again in 2010, Gill collaborated with her subjects to produce these self-conscious portraits, on occasions also conducting technical workshops on photography and displaying some of the images taken in Lunkaransar previously. The book will be released at the gallery on the evening of September 15th and copies will be available for sale at the special price of Rs 1500. On display will be a selection of images from the book in large-scale prints, as well as the series “Jannat”.

The critic and curator Gayatri Sinha has written this on the works:

“Gill’s photo document “Balika Mela (2003-10”) embodies India’s staggered engagement with modernity. What began with Ram Singh’s foto ka karkhana in the 1850s comes to Lunkaransar, 300 km from Jaipur, over 150 years later. For the young girls posing in the makeshift tent studio set up by Gill, the moment of improvisation becomes a performative gestalt. The girls perform gender, cross gender, divines, Bollywood, and just themselves, with an interested gaze at the camera. Technology enables mimicry that traverses class. The 19th century grand studio portrait of heavy velvet drapes and aristocratic subjects is here imitated with a stubborn confidence that exceeds the poverty of materials. Gill as a (woman) photographer lends agency, the freedom to perform, the return of the gaze, the playful mis-en-scene, not unlike the freedom for self representation afforded by the woman photographer in zenana studios a hundred years ago."

In 2003 the nonprofit organization Urmul Setu Sansthan organised a Balika Mela, or fair for girls, in Lunkaransar town, attended by around 1500 adolescent girls from a hundred odd villages spread across Lunkaransar, Chhattargarh, Churu, Nagaur and Ganganagar districts of Rajasthan. The mela had various stalls, food, performances, a Ferris wheel, magicians, puppet shows, games and competitions, similar to any other small town mela fair. Urmul Setu invited me to do something there.

I decided to create a photo-stall for anyone to come in and have their portrait taken, and later receive a silver gelatin print. The stall was in a tent and had a few basic props and backdrops that were sourced from the local photo studio and cloth shop on a very limited budget: lengths of white, grey and black cloth stitched together, a bench, a stool, two chairs, a bowl of plastic flowers with an ornate stand, a mirror and comb for those who wished to look at themselves before. Later, the girls themselves brought in many of the more interesting props such as a paper peacock, a magazine, and hats made from old newspapers. The light was the broad, even light of a desert sky filtered through the cloth roof of the tent. It was all fairly minimal, and since it can get windy out in a maidan in the desert, everything would keep getting blown around or periodically struck down.

Girls came in and decided how and with whom they would like to be photographed – best friends, new friends, sisters, the odd younger brother who had tagged along, teachers, the whole class, the local girl scouts, even a few grandmothers. First they would come by and look, so we often had an audience of onlookers prompting and commenting. Then one girl would usually propose to her friend, or group of friends, that they get their picture taken too. After a little khus phus or whispered confabulation, someone would come forward boldly to put down names on the list. Later, we would start to discuss where and how the picture would be taken: which backdrop, what props, if any. The whole scene was co-directed by me and those in the picture, as well as everyone around us: the girls would try out a few ideas, others would throw out suggestions, wisecracks and jokes, we’d all collapse with laughter, I’d yell at everyone to get serious, then suddenly someone would come up with a genius idea. No one asked why someone might wish to be photographed a certain way. I did not ask why the girls wished to pose three in a row blessing their audience, or wearing paper hats like crowns.

In 2010, I returned to attend a Balika Mela held after a gap of seven years, with an exhibition of the portraits shot in 2003 in a tent. Many of the girls portrayed in the pictures were either at the fair or known to those who attended. Upon popular demand, I ended up making more portraits, this time in color.
www.naturemorte.com