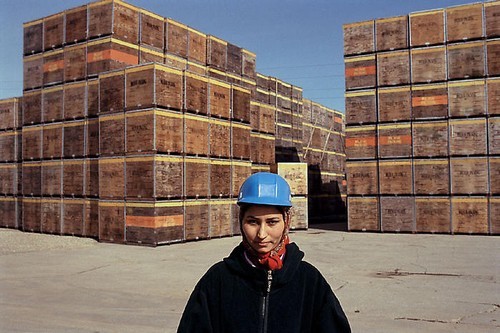 Please note: the exhibition will be at a special venue (see address above) and not at the usual gallery space of A1 Neeti Bagh. A full-color catalog will be available.
Gallery Nature Morte is proud to present the exhibition of Gauri Gill's photo-documentary project "The Americans." Shot across the United States from 2000 to 2007, Gill's project documents the Indian diaspora as it has settled across the country in rural areas, small towns and big cities, both retaining its traditional signifiers of Indian identity and merging within a larger American plurality. The resulting color photographs are simultaneously humorous, poignant, ironic, and beguiling. Gill's portrayal of her subjects and their lives emerges through her strict attention to detail and sympathetic juxtapositions.
From the forthcoming catalog essay by critic and curator Gayatri Sinha:
"Nearly five decades after [American photographer] Robert Frank, Gauri Gill takes a series of solitary journeys through America traveling extensively from New York and New Jersey to California to the Midwest and five Southern states. She moves outward, from the nucleus of family and friends to their networks, through a map lined with the material and psychological presence of migrants. The resultant body of photographs. "The Americans," emerges as a palimpsest that pays homage to Frank as much as it documents the new Americans – Indian immigrants. That Gill addresses her subjects with the transnational gaze of the traveling photographer brings her subject within the potent discourse of migration and diaspora, post-coloniality and the new world. Set in the chromatic intimacy of the candid photograph, it is inscribed by the material residue of two cultures, of the glittering flecks of Bollywood and Hollywood, the Indian and the American dream."
The exhibition has already been on view at Bose Pacia Kolkata (February 16 – March 8) and will travel the Matthieu Foss Gallery, Mumbai (April 10-24); Thomas Welton Art Gallery, Stanford University (July 8 – August 17); Chicago Cultural Center, Chicago (October 4 – December 28); and Bose Pacia Gallery, New York (January 9 – February 14, 2009).
Gauri Gill was born in Chandigarh in 1970. She received her first BFA degree (1992) from Delhi College of Art and her second BFA (1994) from Parsons School of Design in New York. In 2002 she received an MFA in Photography from Stanford University in California. Her works have been exhibited in New Delhi at the Vadhera, Espace and Anant Art Galleries and the India International Centre. Most recently, in 2007 her photographs were included in group exhibitions at the both the Musee Quai Branly in Paris and the Newark Museum in New Jersey. Gauri Gill lives and works in New Delhi.
www.naturemorte.com