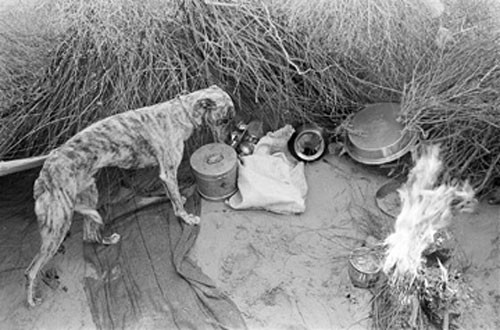 Nature Morte is pleased to present a solo exhibition of photographs by Gauri Gill. Based in New Delhi, Gill has previously exhibited series of works depicting urban scenes shot at night and the Indian diaspora living in the United States. All the while, Gill has been returning regularly to spend substantial amounts of time with nomadic and migrant rural communities in Western Rajasthan. "Notes from the Desert" will be the first exhibition of the works produced there over a ten-year period, on display will be more than forty photographs, edited from a corpus of hundreds.

The exhibition is primarily structured around portraits, some candid and spontaneous, many posed in collaboration with their subjects. The results are humorous, shocking, playful, and heart-breaking. The daily lives and intimate relationships of these families are revealed, as are their struggles with the unrelenting landscape, dire poverty and ancient traditions. Both joy and suffering flow through this body of work; Gill's camera documents the succession of experiences from birth to death, both her sympathies and her surprises.

Gauri Gill was born in Chandigarh in 1970 and lives in New Delhi. She received a BFA in Applied Arts from Delhi College of Art in 1992 and a second BFA in Photography from the Parsons School of Design in New York in 1994. She received her MFA in Photography from Stanford University in California. Her first solo exhibition "The Americans" has been exhibited at Bose Pacia Kolkata, Nature Morte in New Delhi, Matthieu Foss Gallery in Mumbai, the Thomas Welton Art Gallery at Stanford University, The Chicago Cultural Centre and Bose Pacia New York (2008-2009) and a catalog is available. Her works have been included in important group exhibitions of photography including "Where Three Dreams Cross: 150 Years of Photography from India, Pakistan and Bangladesh" (Whitechapel Gallery, London and Fotomuseum Winterthur, Switzerland); "The Self and the Other: Portraiture in Contemporary Indian Photography" (Palau de la Virreina, Barcelona; and "Shifting Shapes: Unstable Signs" (Yale Art Gallery, Yale University, New Haven).

The works in the exhibition are primarily silver gelatin prints, with also some archival digital prints and C-type color prints. All works are for sale, framed, and produced in an edition of 7.
Nature Morte is open Monday through Saturday, from 10am to 6pm, and closed on Sundays.
www.naturemorte.com