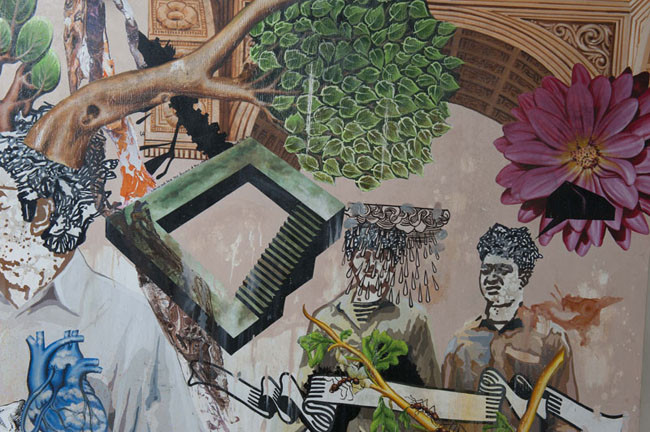 Nature Morte is pleased to present a solo exhibition of new works by the Mumbai based artist Jitish Kallat, his solo show in New Delhi after a gap of six years (also at Nature Morte).

Kallat works in all media: painting, sculpture, photography and video. His works are rooted in the megalopolis that is Mumbai and, by extension, all urban experiences, connecting the disciplines of sociology, biology, and archeology. What at first may seem to be wildly disparate works, upon closer inspection have strong themes in common. Primary among these is the proletariat figure, he or she whose labors actually make the city function, whose multiple histories (both recorded and forgotten) are inscribed in many places (both heroically and mundanely) on the surfaces of the urban fabric. The stories Kallat narrates of the city may be contradictory but are also richly realistic: nourishment accompanies fatigue, elegance comes with the unsightly, a spiritual optimism amid material degradation.

Kallat uses images symbolically, combining elements together to weave layered metaphors about life. Chlorophyll is the green pigment that is found in most plants and Kallat’s photo-collages “Chlorophyll Park” picture an urban oasis that is both real and ideal, a desire to experience the uncanny within the quotidian. In the large sculpture entitled “Annexation” Kallat inscribes the surface of an over-sized kerosene stove with images sourced from the neo-Gothic architecture of Victoria Terminus, a text of sustenance and survival seen by millions daily. In one photo work (“Conditions Apply 2”) images of round roti breads wax and wane as if the moon, representing the cycles of life. Another work comprised of 108 color photographs (“The Cry of the Gland”) presents an index of the shirt pockets of commuters, often bulging or sagging under the weight of daily necessities (pens, cigarettes, keys, wallets), the work force reduced to its most poignant details. In new paintings, Kallat pictures his urban Everyman as an organic being, a synthesis of both nature and culture.

Jitish Kallat, born in 1974, has had many solo exhibitions in leading international galleries such as Haunch of Venison in London, Arndt in Berlin, Arario Gallery in Beijing, and Chemould Prescott Road in Mumbai. His work has been exhibited in group shows in museums and institutions around the world, including Tate Modern and the Serpentine Gallery (London), Martin Gropius Bau (Berlin), Queensland Art Gallery (Brisbane), Kunstmuseum (Bern), Mori Art Museum (Tokyo), Palais des Beaux-Arts (Brussels), ZKM (Karlsruhe), the Art Gallery of New South Wales (Sydney), MAXXI (Rome), and the Gemeente Museum (The Hague). Kallat’s solo exhibition, entitled “Fieldnotes: tomorrow was here yesterday,” was held at the Dr. Bhau Daji Lad Museum in Mumbai in 2010 and his site-specific installation, “Public Notice 3,” was created for the Grand Staircase at the Art Institute of Chicago, where it was on view for one year, from September 11th 2010 to September 11th 2011.

Nature Morte is open Monday through Saturday, from 10am to 6pm, and closed on Sundays. Further information on the work of Jitish Kallat and the exhibition can be found on our website at www.naturemorte.com. For press photographs, please contact Geeta Bajaj at (011) 4174-0215 or Rajeev Dhawan at (011) 2956-1596.