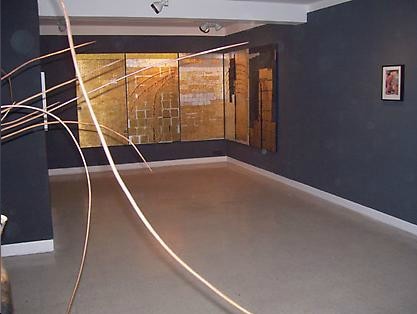 All masquerades are forms of mediation between the real and the imagined. Similarly, seduction implies crossing over a threshold, into territories previously unexplored. Works of art can play at both games, providing disguises with which to encounter the unknown, shuffling the deck so as to come up with infinite possibilities. An element of violence is operative in the works on view, a menace which is both threatening and enticing, caustic while intoxicating.

The digital prints of Chitra Ganesh combine classical references from sources both Asian and European with the bold graphics and punched-up color of contemporary cartoons. She invites us into a hallucinogenic world, where sex and death are ever present and her female protagonists instigate timeless dramas in both an earthly realm and cosmic dimensions.

The black-and-white photographs of Simryn Gill are elegant meditations on destruction and decay, toppling our preconceived notions of beauty and order. Shot within the shell of an incomplete architecture, refuse is casually arranged into compositions of both happenstance and sobriety, with the vicissitudes of nature occasionally entering.

Bharti Kher’s works imply a violent past and a portentous future. With a figurative sculpture and wall pieces that layer bindis over broken mirrors, the artist makes references to colonial histories, the decorative arts, archeology, mythology, and the occult, all the while acknowledging the struggle that is implicit in the construction of meaning.

The iconoclastic paintings of Mona Rai reflect the human body as a site of contestation. Scarred, sutured, punctured and bandaged, her canvases are both intuitive and intensely physical while providing a glimpse of salvation.

Arpita Singh’s most recent works seem claustrophobic with foreboding, populated with armed troops or legions of corrupt businessmen. Her iconographic lexicon synthesizes language, figuration and cartography into a rich surface redolent of an explosive aftermath.

Finally, the original maverick of Indian art, Francis Newton Souza is represented solely by a group of his “chemical alterations,” small-scale works-on-paper in which images are coaxed from the pages of magazine advertisements, obliteration and manufacture going hand-in-hand. As always in his works, a horror of eroticism is coupled with the acknowledgment of self-destruction.
www.naturemorte.com