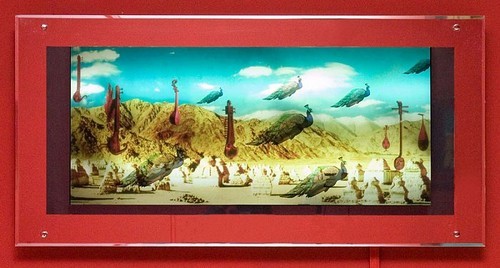 Nature Morte is pleased to present a new installation by the New Delhi-based artist Sheba Chhachhi. Originally created for the Singapore Biennale in September 2006, the work has also been exhibited at the ZKM Center for Art & Media in Karlsruhe, Germany as part of the exhibition "Thermocline of Art: New Asian Wave" (June 15-October 21, 2007) and at the Hangar Biccoca in Milan, Italy as part of the exhibition "Urban Manners" (October 9, 2007 – January 6, 2008). This is the first time the work will be exhibited in India.
The work takes the form of a large, multi-part installation combining sculptures, light-boxes and recorded soundtrack spread throughout the three floors of the gallery space. Through the use of various iconographies and objects (birds, robed figures, landscapes) the work reflects on the histories of the migrations of people, ideas and cultural influences; constructing a parable between ancient times and today, a meditation on the processes and effects of globalization.
The gallery is open daily from 11am to 7pm and is closed on Sundays. For more information or press photographs, please contact Geeta Bajaj at (011) 4174-0215.
www.naturemorte.com