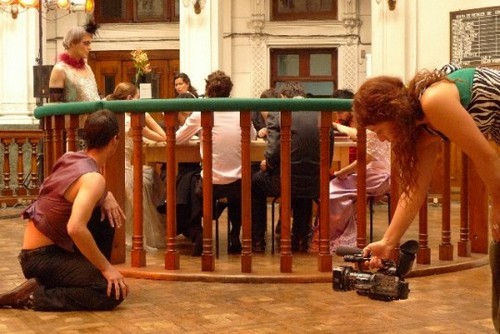 Gruppenbild is a five part exhibition series showing work by the artists Karolin Meunier, Discoteca Flaming Star, Azin Feizabadi, Ming Wong, and Shirin Homann-Saadat in the Showroom at Neuen Berliner Kunstverein. The participating artists all work with performance and installation, and over the course of the year will create this experiment in collaboration with curators Kathrin Becker and Sophie Goltz. With each new artistic intervention, existing installations will be varied and new elements added. From the individual contributions, a collective conceptual image emerges.

The two-channel video installation Timing and Consistency (2010) by Karolin Meunier marks the start of the exhibition. This is followed by the new video work El valor del gallo negro (Buthe – Turm – Börse) by Discoteca Flaming Star, shown for the first time in Europe.

In this video performance Christina Gomez Barrio and Wolfgang Mayer appear as Discoteca Flaming Star. In the stock exchange in Valparaiso, they initiated a five-hour workshop as a “council of poetry,” held together with students of architecture and fine arts as well as the architecture theorist Jose Llano. Based on Mayer’s “Poema de la Bolsa de Valparaiso,” as well as drawings by the artist and other literary and musical sources, they explored abstract processes in the financial world, the (in)visibility of the collective, and the spatial presence of bodies. El Gallo Negro (The Black Rooster) is a dancer from Valparaiso who with his movements and gazes surveys the inactive floor of the stock exchange and directs the camera. The performative behavior of all participants makes the strongly encoded space of the stock exchange a site of social contradiction, a heterotopia. The Chilean city of Valparaíso was the location of Latin America’s first stock exchange, founded by the English, as well as Chile’s first private bank, and here the most important harbor of the Pacific until the construction of the Panama Canal. The video work was created in Winter 2009 for Valparaiso Intervenciones, an art project by SEACEX (State Corporation for Spanish Cultural Action Abroad).

Cristina Gomez Barrio (born in 1973) lives and works as an artist in Berlin. She studied fine art in Madrid, Munich, and Berlin. Since 1998, she has been working together with Wolfgang Mayer under the name Discoteca Flaming Star, an interdisciplinary-artistic performance project. Discoteca Flaming Star offers space for a various artistic practices. Together they look for the limits and possibilities of aesthetic formalization.

Wolfgang Mayer (born in1967) lives as an artist in Berlin, and works in watercolor, video, and performance. With his performances, he uses bricolage-like styles. Together with Cristina Gomez Barrio he works as Discoteca Flaming Star and in the Berlin Project space General Public. Together they create sites of artistic experiments and for the exposure of repressed memories. Their installations and performances have been presented in Artists Space, Whitney Museum, and The Kitchen in New York, and Museum Moderner Kunst (Vienna), Centro de Arte 2 de Mayo (Madrid), Galerie Freymond-Guth (Zurich), and Tate Modern (London).
www.nbk.org