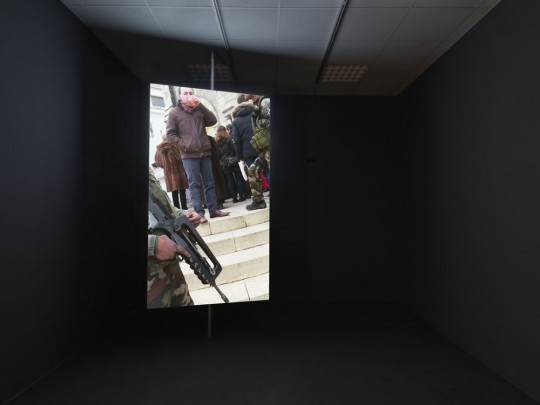 For his exhibition at Neuer Berliner Kunstverein, Eric Baudelaire created a new video work entitled Walked The Way Home, which is based on observations of the growing presence of armed soldiers in the urban space of various European cities as a result of terrorist attacks. The soldiers, filmed from varying angles, are shown immediately next to civilians, so that the contrast between the two groups of persons stands out clearly, creating a surreal atmosphere. Baudelaire employs slow motion and for the soundtrack of the video uses a disturbing composition by Rome-based American pianist and composer Alvin Curran, also the title is inspired by a Curran piece from 1973. Baudelaire made his first observations of military presence in the urban space on his way home from his studio in Paris and continued these observations in Rome, where he currently stays as part of a scholarship at the French Academy in the Villa Medici.

In his work, Eric Baudelaire focuses on forms of representation and reception of history and historiography. He mainly produces film and video installations, but also works with photography, collage, printing techniques and books. After extensive research based on his original occupation as a political scientist, Baudelaire builds his work upon individual protagonists, who have a historical, contemporary or fictional character and develops – also in interaction with real people – fictional documentaries and alternative narratives on historical content, by including historical documents and elements of oral tradition. With subtle irony he creates connections between different socio-political contexts, and in doing so, emphasizes the contrasting nature of his sources.