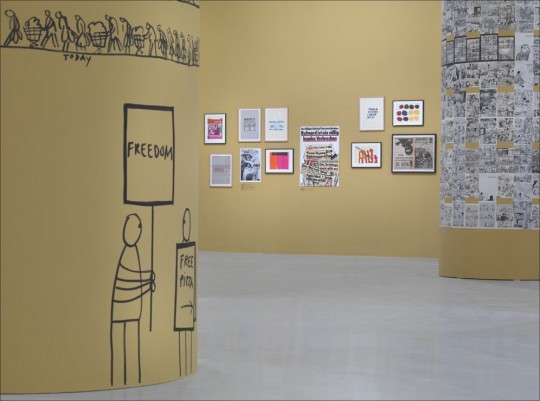 The exhibition Freedom of Speech questions and analyses the concept of freedom of speech and the ideological role it plays in Western democracies. Everything revolves around the question: What if only those who say the truth are allowed to speak? What consequences does the freedom of expression have for our society? How and where is this freedom instrumentalized? Justified questions, that would also have been apt in connection with the debate about Thilo Sarrazin's book and his racist comments in the media. However, this controversy also manifested itself in the caricature dispute in 2005, when a right-wing Danish daily newspaper published the so-called “Muhammad caricatures.” The ensuing conflict and the Iranian reaction in the form of a “Holocaust caricature competition” provoked a public discussion on civil rights and liberties—the freedom of speech, expression, and the press—and truth. The assassination attempt against the producer of the Muhammad caricatures, Kurt Westergaard in early 2010 and his award of the M100-Sanssouci Media Prize in the summer of this year underlined the explosive nature and topicality of the theme. Is it permissible to publish caricatures that knowingly do not correspond to the truth? Which, as in this specific example, reproduce and consolidate racist stereotypes based on purely Western notions and whose truth value can (intentionally) not be tested?

The exhibition confronts examples of media reports (e.g., the “Muhammad caricatures” or the controversial covers of Hustler, Stern, or Spiegel), historical events (e.g., the Black Power and Free Speech movements in the USA), as well as art works.

With the collaboration of the Duisburg Institute of Linguistic and Social Research (DISS), the truth value of the works are examined by means of critical discourse analysis. This form of analysis developed by the DISS on the basis of the theories and writing of Michel Foucault is applied like a film over the linguistic and pictorial levels of the collected media reports and works of art. That the works of art become objects of analysis is unique in this form but takes account of the fact that they also play an important role in constituting everyday knowledge and therefore also need to be considered. According to Foucault, “modern art reveals the truth in scandalous fashion,” for “art has the ability to give existence a form that breaks with all others, the form of true life.”

An application for smartphones has been developed for the exhibition that functions as audio / video guide and provides both interviews with artists, curators, and authors as well as further information on certain subjects addressed by the show. Please download the free app here.

Freedom of Speech is a cooperation between Neuer Berliner Kunstverein and Kunstverein Hamburg (December 18, 2010–March 27, 2011) in collaboration with Duisburg Institute of Linguistic and Social Research (DISS).
www.nbk.org