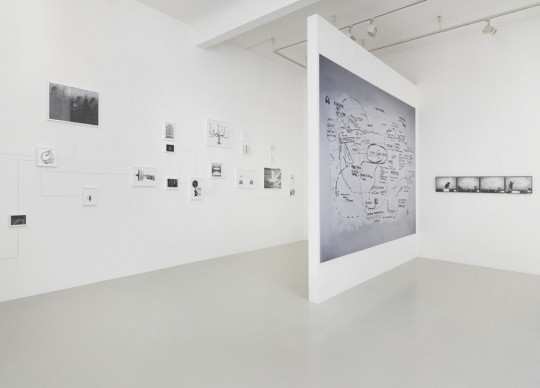 In cooperation with Savvy Contemporary

The art and research project Giving Contours to Shadows takes its cue from the Glissantian concept that history, a “functional fantasy of the West“, cannot be left in the hands of historians only. In that sense, the project looks at ways, by which artists, curators and thinkers relate to their epoch, to times past and to the drawing of prospective trajectories, thus weaving alternatives to established narratives – from embodiment practices to possibilities of pre-writing of History. Unfolding into a group exhibition at Neuer Berliner Kunstverein and SAVVY Contemporary and a performance program at Maxim Gorki Theatre and Gemäldegalerie in Berlin, a roundtable program as well as a series of satellite projects in Marrakech, Nairobi, Dakar, Lagos and Johannesburg, Giving Contours to Shadows reflects on philosophical, socio-cultural and historical aspects of global interest. With a particular interest in creating space for different epistemologies, the project will cast light on discourses that transcend Western perceptions of history, and propose contemporary narratives that overcome the colonial and post-colonial discourses. The exhibition and program are framed in five thematic chapters: Performing and Embodying histories, Wandering through histories, Unthinking the Chimera, Sequestrating History and Pre-writing histories. Furthermore, the roundtable program is dedicated to discussions on the ideologies of space, performativity and the archive, and notions of pre-writing history.
www.nbk.org