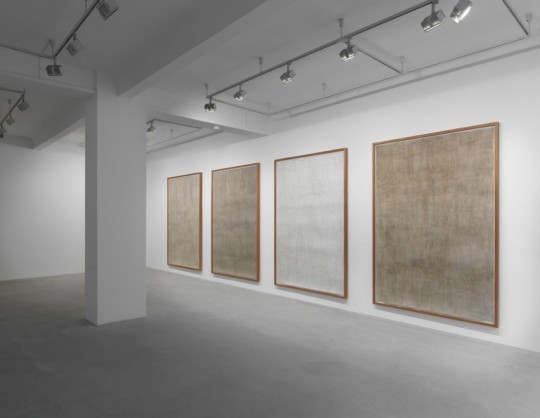 Since the second half of the 1980s, in his artistic work Luca Vitone engages with the notion of the construction and representation of specific locations and the different languages that describe and define these places in their geographical, political, social, cultural and poetic dimensions. In particular, he is interested in how places are characterized through art, cartography, music, food, political groupings and ethnic minorities. Many of his installations and paintings can also be understood as mental landscapes that were created from locally found remnants of civilization (dust, waste, food). His “monochromies” are conceptual self-portraits of the places in which they originated. The artist exposes untreated canvases to local conditions, until the effects of weather or pollution have left their marks, in order to then present them,stretched and framed as minimalistic, monochrome paintings, in the exhibition space. In another series of works, recently presented at the 55th Venice Biennale of 2013, Vitone creates olfactory sculptures of places that solely by the presence of a scent in the room appeal to the collective memory and trigger certain associations in the viewer. For Imperium, his solo exhibition at Neuer Berliner Kunstverein, Luca Vitone has created a new series of four watercolors made from dust (Räume (Rooms), 2014), representing different institutions of state power: the economic (Deutsche Bundesbank (German Federal Bank), Frankfurt/Main),the legislative (Deutscher Bundestag (German Parliament), Berlin), the judiciary (Bundesgerichtshof (German Federal Court), Karlsruhe) and the cultural (Pergamonmuseum, Berlin). The monochrome“portraits” are painted on paper with the dust of the respective places. Furthermore, Vitone developed a new olfactory sculpture, Imperium (2014), receiving the visitors when entering the otherwise empty exhibition space. The sculpture is composed of different fragrances, which together evoke the “smell of power”. For this work, the artist again collaborated with the master perfumer Maria Candida Gentile, just as for his contribution to the Italian Pavilion at the last Venice Biennale.