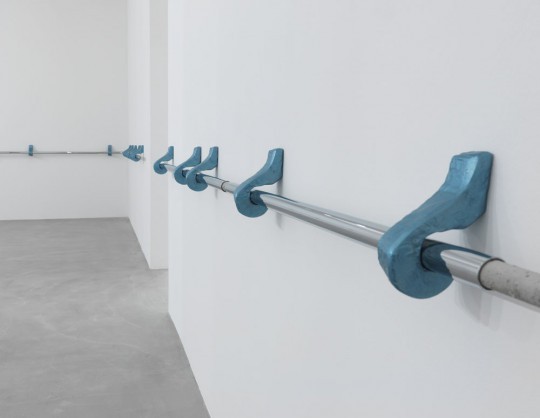 “Off the rack” is a synonym for “off-the-peg” or “ready-made”. It refers to clothing that is not tailor-made, but produced in series according to industrial standards. Having lost the social stigma in terms of clothing, within fine art an “off-the-rack” needs a good reason: the aura of the “original” or the “unique piece” remains, though often questioned, unbroken. One such good reason is an edition, which artists generally produce to support notoriously underfunded institutions. Being produced in varying numbers, editions have the character of goods and at the same time come across as “democratic”. The threshold of owning an edition is, due to its relative affordability, lower.

Editions rarely find their way into the solo exhibitions of artists. Too ambivalent their status as an artistic work, too obscure their relationship to the “originals”, whose canonization – and appreciation – is a mostly unspoken task of any institution. To accomplish this task, institutions develop standards that regulate and formalize the handling of the exhibited works: standards of safety (“Do not touch!”), standards of presentation and standards of communication. Even this text is part of that framework of conventions; just like the hanging height or the position of a pedestal, it puts you, the readers, in a certain relationship to the work, with the intention of being a “guide”, “support” or “assistance” for understanding it.

Raising awareness for the economies that determine the production, presentation and perception of art, is Nairy Baghramian’s aim in her exhibition at Neuer Berliner Kunstverein. With Von der Stange (Handlauf) / Off The Rack (Handrail) (2014) and Beliebte Stellen (Privileged Points) (2011) she brings together two works that both are mixing up the relationship of edition and unique piece and put up for discussion the roles of the institution and the viewers within these economies of attention and valorization. The exemplary display of elements from both works in one of the shop windows, in which n.b.k. spotlights its program to the public, is the opening figure that triggers this reflection.

Privileged Points is the title for the airy looking, arched sculptures that in the first room are spread on the floor and along the walls, as if at random. Just like materialized gestures, the objects claim to identify points that are particularly well suited for the presentation or perception of something – the question remaining open. The lightness, though, is fictitious: looking like rubber, the sculptures are actually made of metal, coated with several layers of resin and paint – a process that at closer inspection can be reconstructed from traces of single drips. And even their supposedly random allocation bears the burden of history: originally designed for the Stedelijk Museum in Amsterdam, Baghramian’s Privileged Points invoke the historically changing conventions of exhibiting. Crucial questions, such as spatial allocation, hanging heights, sight lines, with-or-without-pedestal, are associated with the airy lapidary swirls. Each of these decisions will affect the encounter between the viewers and the work, creates hierarchies and extends attention privileges. Baghramian’s objects are marking points, where something or someone ought to be placed, and at the same time they occupy these points themselves. Work of art, institutional structure and viewer, here, are presented as a formation that can only be reflected in a productive way in its respective relationality.

Whereas Privileged Points are unique pieces with a serial character, Off The Rack (Handrail) is actually based on an edition that the artist has produced in 2012 for Gesellschaft für Moderne Kunst at Museum Ludwig in Cologne. The work shows a handrail, which starts out in the first room and runs – situated somewhere between eye level and grip height – along the walls through the entire second room. Coming across as more rigorous than Privileged Points, the work pursues rather similar strategies: once again, reference is made to the structure of the space (its floor plan is quasi traced) as well as to the physical involvement of the viewers, whose views are directed – around one great emptiness – along the wall. The hands, though explicitly appealed to, may not be used. Off The Rack consists of reproductions of the elements of the Cologne edition: chromed brass tubes, filled with concrete, of varying lengths that are fastened to the wall by aluminum mountings colored in metallic-blue. The title phrase, originally a humorous allusion both to the appearance of the work and to its status as an edition, here develops a potentially edgy undertone. Is it legitimate to re-make an edition into a “work of art”? Does this shift signify a work of art “off the rack” and thus – in economic terms – a loss of value? Or does it result in the appreciation of the edition, which is quasi ennobled to a “work of art”?

The n.b.k editions, prominently presented on the upper floor, are closing the bracket that Baghramian opened with the shop window display. The questions, however, raised by the exhibition’s shifts and changes in perspective, remain open in a programmatic way. They are questions about the strategies of producing attention and value. About the role of institutions as well as the conventions of exhibiting that decisively determine the experience of art. About the relationship between “original”, “series” and “multiple” and about the afterlife – the usability – of works within the artistic practice itself. And not least, Baghramian is concerned with sculptural possibilities that allow her to ask these questions and, at least temporarily, invalidate attributions – giving shape to something, which actually does not have any.