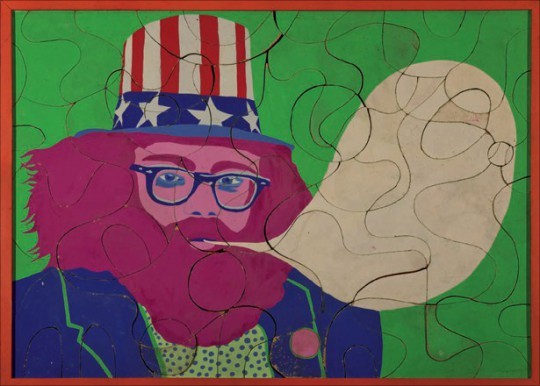 On the occassion of the ceremony of the awarding of the Hannah-Höch-Preis 2011 to Ulrike Ottinger, Dr. Knut Nevermann, state secretary for sciences and research, and Marius Babias, director n.b.k., will give a speech on Friday, November 25, 2011. The laudatory speech will be held by Hanne Bergius, professorin for art history.

By awarding the Hannah-Höch-Preis 2011, offered by the State of Berlin’s Department of Cultural Affairs, the complex work of filmmaker and artist Ulrike Ottinger will be honored. At Neuer Berliner Kunstverein the unknown and previously unseen early oeuvre of Ottinger’s paintings (1963–68) will be shown on the occasion of this ceremony. While in recent years Ulrike Ottinger’s cinematic view is characterized by high ethnographic reflexivity, in her paintings and serigraphs some later icons of her early films are already developed. This yet unknown aspect of her oeuvre, till this day, proves relevant contemporaneity, which is in conflict with the present and past of post-Nazi societies as well as other cultures. In her idiosyncratic early work, inspired by pop art, her interest in the principle of collage/montage and the surreal/absurd already shows in the way it later recurs in the films.

From 1962 to 1968 Ulrike Ottinger was living as an independent artist in Paris and, at the University of Paris-Sorbonne, attended lectures on art history, religious studies and ethnology of Claude Lévi-Strauss, Louis Althusser and Pierre Bourdieu. From the beginning of her artistic career she has also been dedicated to photography, writing screenplays and directing for the theater. Ulrike Ottinger participated with her works, among others, at the 3rd berlin biennale (2004), Documenta11, Kassel (2002) and Venice Biennale (1980). Solo exhibitions and retrospectives took place at e.g. Centre Pompidou, Paris (2010), Museo Nacional Centro de Arte Reina Sofía, Madrid (2004) und im Museum of Modern Art, New York (2000). In January 2010, she was awarded the Order of Merit of the Federal Republic of Germany.

Book Series “n.b.k. Exhibitions”
On the occassion of the exhibition of Ulrike Ottinger’s early paintings, a publication with an extensive documentation and with texts by Hanne Bergius and Nora M. Alter will be published by Verlag der Buchhandlung Walter König, Cologne, 2011, 192 pages with color images and fold-outs.