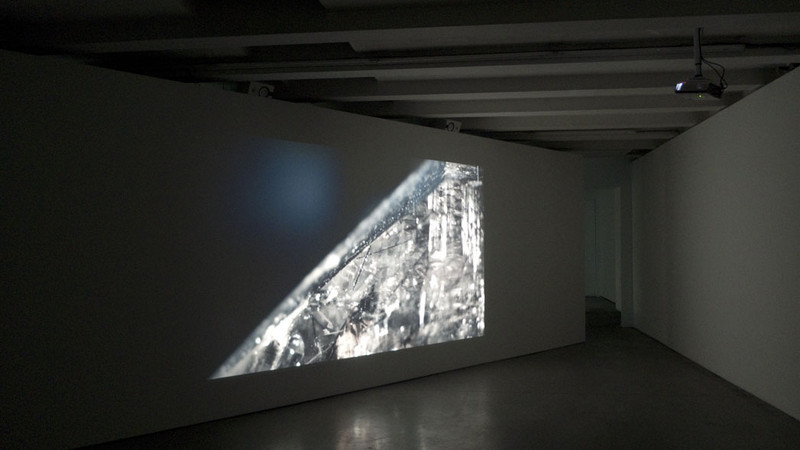 A simple machine is a term coined in the 18th century to describe a mechanical device able to change the direction or magnitude of a force. Classically there are 6 such elementary devices: the lever, the wheel, the pulley, the inclined plane, the wedge and the screw. This show is conceived as an addition to this list. It makes the hypothesis that an exhibition – any exhibition – may very well be nothing else than another crude and rudimentary attempt in this mechanics of inflection.

For their exhibition at Netwerk, Fabien Giraud and R_aphaël Siboni_ (b.1980 and b.1981, live and work in Paris) present two different facets of their research. In the Main Gallery, they will show and oppose two types of ‘measurements’: La Mesure Végétale and La Mesure Minérale. Both works prolong a sequel of cinematographic experiments initiated at the Louvre in 2011 and confronting the historical foundations of the modern museum – understood here as the Enlightened attempt at scaling the world to the human standard measure. Whether by confronting a camera with the destructive vision of a particle accelerator (La Mesure Louvre, 2011), synchronizing our experience of a museum of mineralogy to the immensity of geological time scale (La Mesure Minérale, 2012) or suspending our vision in the frozen vicinity of an arctic seed depository (La Mesure Végétale, 2015) each film of this series operates through a de-scaling of these institutions and the anthropocentered experience they induced.

In the Cinema, they show the first three episodes of The Unmanned – a film series recounting in reverse a non-human history of technics. Eliminating all instrumental conception and at the same time making people a simple expression of its movement, the series retraces the path of an “unmanned” technique – in the sense of uninhabited vehicles in contemporary warfare. It opens in 2045 with the death of Ray Kurzweil at the threshold point of technological singularity – and moving upstream in history, makes each date, each inflection, the juncture of an alternative history.

The Unmanned series is composed of 3 seasons, each comprising 8 episodes. The first season (2045-1542) retraces a discrete history of technique by exploring the invention of modern computation and its automation.

Their new episode for this first season, La Mémoire de Masse, unfolds during the second Canuts revolts in Lyon in 1834. These riots now known as the ‘bloody week’ came as a reaction to the automation of work in the silk industry by the Jacquard Loom and its implementation of the punched card – first historical ‘mass storage’ system allowing the inscription and replication of complex weaving patterns. This inaugurating event in the history of workers emancipation movements of the 19th century is actually the first revolt against modern computation. Fully computer-generated, the riot sequence that splits the film in two parts operates a reversed history by transforming a revolt against the algorithm into an algorithm of revolt. Beyond this simple historical vexation, La Mémoire de Masse deploys a dual simulation: both as the reenactment of a past history and the prediction of an entirely different becoming.

Fabien Giraud and Raphaël Siboni have recently exhibited at the Palais de Tokyo in Paris, Casino Luxembourg and the Santa Fe and Moscow biennials. They are currently participating in the 2015 Lyon Biennial – La Vie Moderne – where their new work 1834- La Mémoire de Masse is also premiering.
www.netwerk-art.be